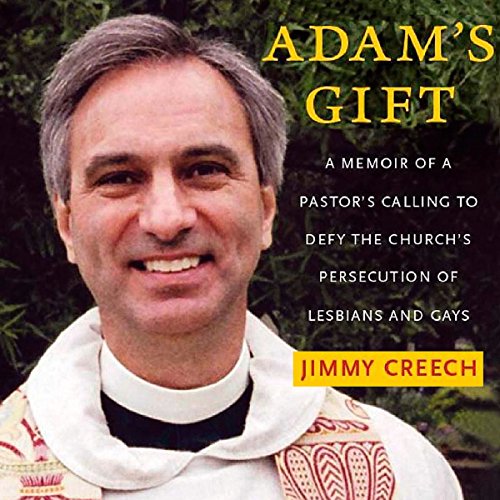 By: Jimmy Creech
Narrated by: Ralph Morocco
Try for $0.00

Jimmy Creech, a United Methodist pastor in North Carolina, was visited one morning in 1984 by Adam, a longtime parishioner whom he liked and respected. Adam said that he was gay, and that he was leaving The United Methodist Church, which had just pronounced that "self-avowed practicing homosexuals" could not be ordained. He would not be part of a community that excluded him. Creech found himself instinctively supporting Adam, telling him that he was sure that God loved and accepted him as he was. Adam's Gift is Creech's inspiring first-person account of how that conversation transformed his life and ministry.

Adam's visit prompted Creech to re-evaluate his belief that homosexuality was a sin, and to research the scriptural basis for the church's position. He determined that the church was mistaken, that scriptural translations and interpretations had been botched and dangerously distorted. As a Christian, Creech came to believe that discriminating against lesbian, gay, bisexual, and transgender people was morally wrong. This understanding compelled him to perform same-gender commitment ceremonies, which conflicted with church directives. Creech was tried twice by The United Methodist Church, and, after the second trial, his ordination credentials were revoked. Adam's Gift is a moving story and an important chapter in the unfinished struggle for lesbian, gay, bisexual, and transgender civil and human rights.

"Eleven years in the making, the author's valiant, first-person narrative examines the conundrum of religion vs. reason.... An inspirational example of unbiased humanitarianism." ( Kirkus Reviews)
"With often rich, always empathetic prose, Creech proves to be a pastor - who honors the minds but challenges the ideas - to a large and varied flock of readers.” ( Denver Post)
"Creech's detailed dissection of deep-rooted anti-gay attitudes, intensely personal and spiritually impassioned, honors a remarkable straight ally." (Richard Labonte, Book Marks)

What listeners say about Adam's Gift