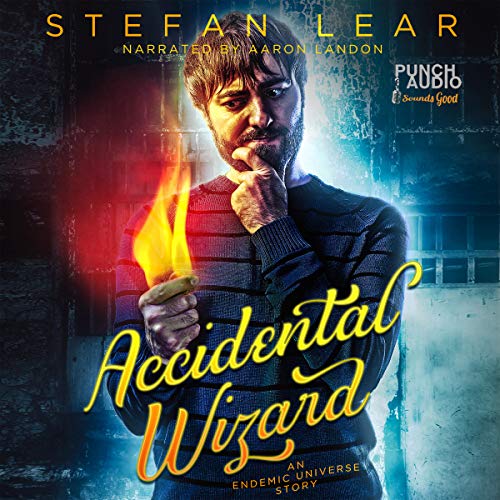 Evil is a constant, not a concept, and Evil won't stop until Paul Logan is destroyed. When his girlfriend is violently murdered by a hound of hell, Paul Logan discovers he can wield magic. Since then, not everything is what it seems. In fact, nothing is as it seems. With the help of a mentor, he struggles to learn about his new powers. But when the man who murdered his mother reappears, will he be able to control what happens next. ln a battle filled with blazing guns and formidable magic, Paul attempts to destroy the Evil that wants him dead. His life hinges on his success or failure. If you like M.D. Massey, Jim Butcher, or Shayne Silvers, then you’ll love this dark urban fantasy book. Grab your copy today!

What listeners say about Accidental Wizard

The story is interesting. A good setup for the rest of the series. I struggled a bit getting used to the narrator and then was good with him. His charater voices are great it's just the non charater speaking parts than can be a bit bland. Alot of Action in this setup short story. It will be interesting to see what happens in the first book. I received a copy of this Audiobook in exchange for my honest review. All opinions are my own.

I received this audio book for free in exchange for my honest review. Both the writing and narration in this fantastic story are impeccable. You will definitely love this one. I hope I get the opportunity to review the rest of the installments.

I really enjoyed this and can’t wait for the next instalment.
The story was well structured and will keep the listener engaged. It is complex but not so complex that it can’t be listened to as you work.

The narrator was an excellent choice with a lovely voice to listen to and very competent with different accents and voice styles for the various characters.

I enjoyed this book so much that I have also bought the ebook to read myself.

good short story good narration could have been expanded to make even better story .