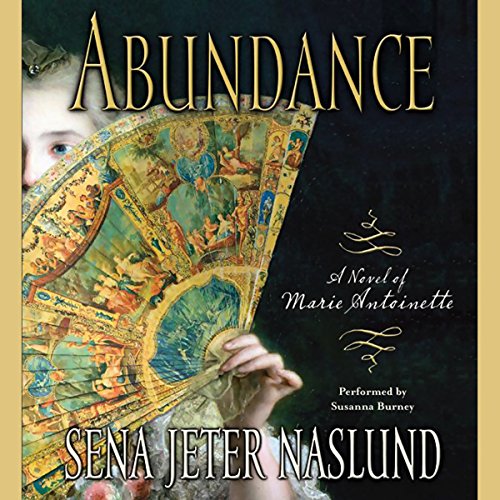 By: Sena Jeter Naslund
Narrated by: Susanna Burney
Try for $0.00

Marie Antoinette was a child of 14 when she was made to leave her family and country to become the wife of another child, France's 15-year-old King Louis the XVI. Far from home and suddenly thrust not only into the role of a woman and wife, but of a queen, Marie Antoinette lived an astonishing, though short, existence.

Though fictionalized, Abundance is based on Sena Jeter Naslund's impeccable research. It reveals Marie Antoinette as an entirely different person from the one who supposedly said of the starving French peasants, "Let them eat cake"; in fact, she rebelled against the extravagances of the court. But as an outsider, she was the target of an uprising that finally decided her fate. Naslund, who brought to life a compelling fictional woman in Ahab's Wife, now draws a gripping portrait of an historical figure we thought we knew. And in doing so, she has created one of her most memorable and moving characters.

"With vivid detail and exquisite narrative technique, Naslund exemplifies the best of historical fiction, finding the woman beneath the pose, a queen facing history as it rises up against her. "(Publishers Weekly)

What listeners say about Abundance

Not for history fans

If you love history, you're better off going elsewhere for a look at Marie Antoinette. This is a shallow look at the person and especially the period. It doesn't connect with events outside the palace and show what leads to Antoinette's, and the book's, end. For history fans, an opportunity missed.

Awesome. Better than I expected.

I enjoyed listening to this book more than any novel in my library. It was extremely close to the real life history of Marie Antoinette and the Versailles Court. I learned quite a bit about this period in history just from this novel.

Beautifully written. This was an eye opening and thought provoking look at her life.

So good! I have read this book a few times and love it everytime. It connects to the historical time period of Marie Antoinette, and describes her possible thought processes and the time line of her life. Totally worth a credit.

The detailing made it very easy to picture and even though I knew how it ends I was still sad.

I can't wait to listen to more! Love this author and the woman who read it! Smooth voice and is how I imagine Marie's voice to be.

This book was just sad, knowing the whole time what her fate would be did not help, the queen seemed to get the short end of the stick and the people should of never did that to there soverans but I did like the book.

This audiobook is not unabridged

The website states this title is unabridged. It is, in fact, missing many passages when compared to the book.