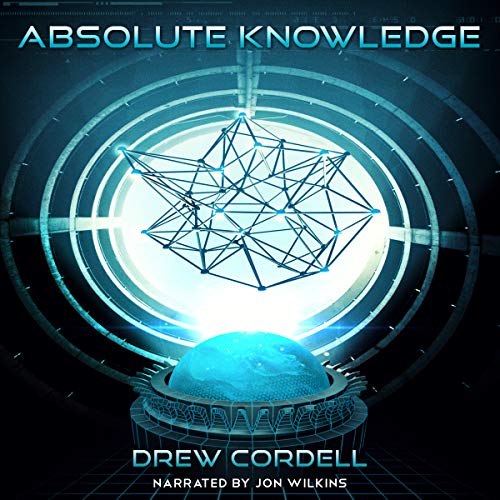 By: Drew Cordell
Narrated by: Jon Wilkins
Try for $0.00

How far would you go to hide a truth that will kill you?

My life changed in a matter of minutes. The choices I made led me to a life of crime and caused me to become the worst sort of criminal; I became a traitor to the country of New York.

For better or worse, the path my life has taken is irreversible. I’ve killed, I’ve died, and I’ve risked my life in attempt to destroy a society built on over 100 years of lies and corruption.

My name is Jacob Ashton, and this is my story.

Absolute Knowledge is the first of a trilogy that takes place in a dark, futuristic New York City set in 2146. The country of New York is divided into three physical tiers, and the faceless government is working to establish absolute knowledge by collecting the thoughts of its citizens.

In Absolute Knowledge, every thought has a price.

What listeners say about Absolute Knowledge

The narration is horrific. It's like the narrator picked up the book for the very first time. His delivery is all messed up and there are times when he actually messes up, stops, and starts the sentence over. it's very obvious he doesnt read ahead and his pitch of his voice does not follow the events of the story at all. It also sounds like he needs to blow his nose. That said, his Edgar voice is great.

The story itself is an interesting concept, however it is probably exponentially better in book format. I found myself distracted from the story due to the issues mentioned above.

I will probably try to give the paper format a try.

I can't with conscience give it even one star.

I really tried to give this book a chance, because it is an interesting concept. The narrator was so horrible, however. it was like listening to a barely literate middle schooler read aloud in class. It actually frustrated and angered me to try and make out the man's unintelligible garble. I finally gave up. I will avoid frustration in the future and avoid books with this narrator.

I liked the story. There were a lot of twists to keep me engaged but none that were too outrageous. However the quality of the recording could really pull you out of the experience. Multiple times it seems like even different parts of a sentence were recorded at different times with a different set up even to the point that I wondered if it was a different person saying a word or two. Also a lot of hiccups and repeats of words or string of words.

Fun but not very deep

You need to know what you're looking for when you get in to it. I just wanted a fun sci fi to have to cleanse my pallete after listening to some heavier stuff. Its short and sweet which is sometimes what you want.

good story. but narrator is awful.

I really like the story. Interesting and fast moving. But the narrator sounds as if he is drunk.