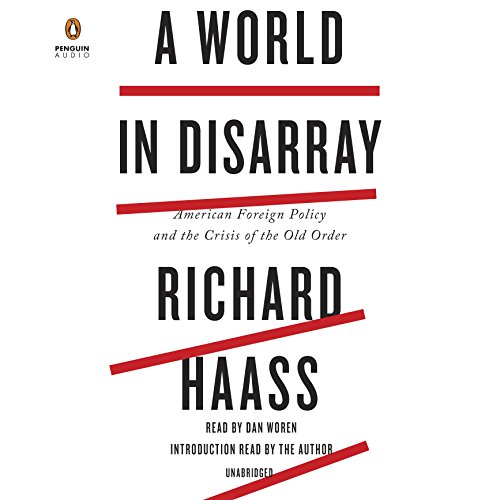 A World in Disarray

An examination of a world increasingly defined by disorder and a United States unable to shape the world in its image, from the president of the Council on Foreign Relations.

Things fall apart; the center cannot hold. The rules, policies, and institutions that have guided the world since World War II have largely run their course. Respect for sovereignty alone cannot uphold order in an age defined by global challenges from terrorism and the spread of nuclear weapons to climate change and cyberspace. Meanwhile, great power rivalry is returning. Weak states pose problems just as confounding as strong ones. The United States remains the world's strongest country, but American foreign policy has at times made matters worse, both by what the US has done and by what it has failed to do. The Middle East is in chaos; Asia is threatened by China's rise and a reckless North Korea; and Europe, for decades the world's most stable region, is now anything but. The unexpected vote for "Brexit" signals that many in modern democracies reject important aspects of globalization, including borders open to trade and immigrants.

In A World in Disarray, Richard Haass argues for an updated global operating system - call it world order 2.0 - that reflects the reality that power is widely distributed and that borders count for less. One critical element of this adjustment will be adopting a new approach to sovereignty, one that embraces its obligations and responsibilities as well as its rights and protections. Haass also details how the US should act toward China and Russia as well as in Asia, Europe, and the Middle East. He suggests, too, what the country should do to address its dysfunctional politics, mounting debt, and lack of agreement on the nature of its relationship with the world.

A valuable primer on foreign policy: a primer that concerned citizens of all political persuasions - not to mention the president and his advisers - could benefit from reading." (Michiko Kakutani, The New York Times)

"A must-read for the new American president and all who are concerned by the state of the world and the prospect of things getting worse. Richard Haass takes the reader galloping through the last four centuries of history to explain how we got to where we are, and then offers an insightful and strategically coherent approach to coping with and managing the challenges before us. Practical and provocative: a book that sets the policy table. (Robert M. Gates)

"Haass’s views demand the highest respect, because he understands that the foremost requirement for stability is that the great nations can deal with each other, and should use diplomacy, an art that recent British governments have almost abandoned in favour of soundbite broadcasts, and that in America threatens to be displaced by a tweetocracy. He understands the limits of power, and of the possible: terrorism must be contained, but cannot be eliminated. China and Russia must be granted respect on the world stage, but a willingness to resist their acts of aggression must be supported by credible western armed forces. America needs to change its Middle East policy, but cannot conceivably walk away from the region. If we had grounds to suppose that the new tenant of the White House was taking Haass’s book to his bed with him, the rest of us might sleep a tad easier in ours." (Sunday Times)

What listeners say about A World in Disarray

An interesting summary of the "Establishment" POV

This is required reading for anyone looking to understand geopolitics, because it represents one of the foundations of the discipline - how the game is played by those who are in it. Haass is very much the "Establishment". You need to temper this perspective by reading other authors, and also those from disciplines such as international law and human rights, economics and development.

The book can basically be categorised into two halves - introduction and basics of foreign policy, which many readers will be familiar with, but is a good place to start for beginners (as long as you temper it with other POVs). The second half is Haass' own theory for how international relations should develop in a globalised future - under, of course, the kind and fatherly eye of the USA.

I look at the world politic and how we got here

oh well narrated and interesting look at World politics and how we got here. didn't agree with all of his analysis and solutions . but good discussion points

Informative. Left me optimistic and pessimistic

Where does A World in Disarray rank among all the audiobooks you’ve listened to so far?

Fairly high in my nonfiction list. The narration was clear and informative. The author describes the complexity of the world very well and suggests some reasonable policy prescriptions that are thought provoking but unattainable in our current broken political system.

Have you listened to any of Dan Woren and Richard Haass ’s other performances before? How does this one compare?

The fundamental need for an informed electorate is essential for progress in the future.

Mr. Haass is obviously well qualified to address the issues covered in this book. I found the book generally thought provoking and apolitical. I may buy the earlier book he wrote on our domestic issues.

Thoughtful overview of int affairs, but...

Thoughtful overview of int affairs, but... the premise is week or false. He explains why the world has improved and avoided great war since WWII, then he yelps out a pile of scary news stories as his basis for the rest of the book. I take small issue with his presentation of a few historical anecdotes, namely Rwandan genocide - some of his choice of language downplays the violence and discrimination that began in the late 50s and also he says UN peace keepers on the ground were unwilling or unable to intervene, the Ghanaian and Belgian troops begged to help and tried, the credit for malicious inaction must be given the HQ in NYC and above - anyway his noting of relevant events was enough to get his point across, that the US tended (tends) to over-learn lessons. Good read, but dang I would love a sit down with Haas to challenge some of his assertions. yaay! a republican accepting the science of climate change and offering thoughtful strategies to address it!

Would you consider the audio edition of A World in Disarray to be better than the print version?

I haven't referenced the print edition.

The story was fine, but dependent on one's current understanding of history and current events.

The book is in three sections. 1. History - we can all profit from a recap of history, 2. Current events, which was interesting but only revealing dependent on current knowledge, 3. 'If I ruled the world' solutions to current problems that are eminently practical ideas that will seldom be effected by current government and power structures.The book is a good primer on current events.

This book did a fine job in regards to giving an overview of the history of world order, as well as analyzing the world order of today. Richard Haas spends considerable time on North Korea and Chinese relations, while also including analysis of threats such as nuclear proliferation, climate change, the collapse of the world financial system, and isolationism. If the reader is looking for deep and thorough insight into threats such as Russia, ISIS, or Chinese aggressiveness in the East and South China Sea, I would say this is not the best read for you. Moreover, this book seems to focus more on "big picture" and overall policy rather than minute details. That said, this is still a fantastic book which I would confidently recommend.

A difficult yet interesting book

I appreciate the structure of the book. However for the amount of content, I wish the language used was made the book more accessible. Getting through the book took a while. Perhaps I was not the intended audience.

I learned a lot, how ever some was above me. Overall it comes off as very fair, objective, and insightful.

This book was easy to follow and informative. Mr Haas makes an excellent case for Informed actions for US as participants in global society, economy and culture. Voters should be educated in the US involvement in the world. Isolation is impractical and harmful.

a bit too shallow

I expected more depth on some of the issues coming from a career diplomat as High ranked as he is. I studied at the Kennedy School any glad I didn't take any of his classes and instead listened to this audiobook

Didn't feel I read too many new incites

I don't feel I learned much that was new

What does Richard Haass and Dan Woren bring to the story that you wouldn’t experience if you had only read the book?

not sure what this question means.

Could you see A World in Disarray being made into a movie or a TV series? Who would the stars be?

An illuminating book about the state of the world

This books explains about the past, current, and possible future of the world. It has a wealth of illuminating and minute details of the world. The author is eminently experienced in foreign policy of the U.S.

However, the information provided is biased towards the US as the centre of the word. Not everyone would think this way. It's a great book to possess if you don't harbour any hatred against the country

why did haas bother?

unbearably pedestrian
rehashing well known stuff in a boring way
bureaucratic English, turgid...
to be avoided. The facts in the early chapters have been reported elsewhere, better. I don't know about the later chapters as I gave up.