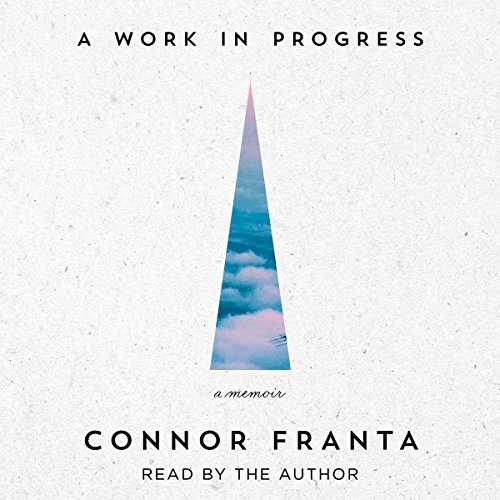 A Work in Progress

From YouTube star vlogger Connor Franta comes an audiobook that grows out of his massive social media outreach - filled with annotated postcards, notes, texts, tweets, journal entries, emails, and letters that chart his coming of age.

The front of the postcards feature his photos, both of himself and the things that inspire him, with the back answering questions from fans or relating anecdotes about the things that drive and influence him. Listened to from start to finish, the book tells a coherent narrative about Connor's coming of age and becoming an adult and the ups and downs that are a part of that. From bullying to dating to leaving home, this is an inspirational book for fans who are growing up and establishing their individuality. The various modes of communication in the book also reflect changes in Connor's own use of technology over the last several years.

A cross between an essay collection and a coming-of-age memoir, told in brief, the book is divided into sections, each beginning with a short introduction about what's affected Connor growing up. For example, a section on family begins with a short piece on Connor's family and what he's learned from them, so that his fans can get a greater insight into his life and learn something from it.

What listeners say about A Work in Progress

I absolutely loved this book. I adore getting to know people I love and look up to in so many ways. so getting to hear it and it actually being read by Connor was amazing. I wish there was more to the book but hopefully he will write more in the future. much love Con.

It was so, so great. Thank You

Thank you so much, Connor. You've written this book and it's helped me, as well as other, so much. The physical copy is great, but the Audiobook is so much better, your voice actually reading what you've written to us. Thanks. A Lot.
Twitter: @souffieb0y (yes, with an 'i')

I loved it! I would recommend this to any one who wants to read it. I chose my ratings because this book was perfect!

I haven't read books in a while, I loved them as a child but as I grew up I stopped. This is essentially the first book that I bought/downloaded. This is coincidentally my first audio book, ever, and it was nothing short of satisfyingly fulfilling. It might seem trivial, a 22 year old writing a memoir, but it's a little more than that. In a wonderful way it offers you new perspectives, it's an opportunity for you to re-evaluate your life, where you are and what you're doing, whether it is what you want your life to be. Amazingly relayed by the author, so you know exactly what tone, emotion and feeling each word, sentence and paragraph should evoke. It's much like a roller coaster, a collection of emotions, happiness, sadness, pity, envy, joy etc in a unique way that makes you want to go out there.
I'd encourage everyone to get a copy, get a copy so that it can offer you the new perspective your life needs, whether you're feeling overwhelmed, that perhaps you can't go on any further doing what you're doing, or whether you need assurance, get a copy, listen/read the book and get the answer you need.
In retrospect, I was sad when it ended, but happy as to what I can take from it (the experience of the book) all.
I'm definitely looking at it all differently.

i have a whole lot of admiration for Connor after listening to this. listening to A Work In Progress has made my week better with the inspirational quotes and stories told

Finished the same day I downloaded it. At times I smiled and other times I revisited my own past.

This book is such an amazing inspiration to just make the most beautiful memories out of life.

Where do I begin? Really proud of you Connor! You're my hero and idol ❤

I found this book very relatetable to my own life, so i adored it!

I usually listened to this on the walk home from school and it made me come home with more motivation to do homework, a more positive attitude, and helped me to appreciate even the smallest things, like a cluster of flowers on a bush on the way home. I love Connor so much, not just his videos but as a person, and his creativity and passion and intelligence just all came together and was evident in his writing. I honestly am going to re-listen to this whenever I feel down. Thank you for this piece of art!

This book is for anybody and I mean anybody. With each spoken word filled with passion from Connor, you are able to see and feel the person behind the computer screen. Moments of laughter,sadness and accomplishment fill this book and I for one am in awe.
Awe of the fact that he is able to express such deep thought in a way we,as an audience can relate to, you not only makes the book about himself but his audience and help them.
From someone who has watched Connor on YouTube to see him write such a beautiful and well written book I can honestly say I have deep pride and admiration for this man.
Thank you Connor, from myself and many others like me, this book has helped me realise my dreams and to live for the moment.
Well done and congratulations on such an extraordinary achievement.

i loved this book! it's amazing!
ILYSM Connor!😄
maybe write another book? called 'a work in progress 2' ?😂😂😂

Listening to Connor's voice for over 3 hours has made me realise where I've been going wrong, and for so long.

I feel I connected with the reason he wrote this book, I no longer feel stuck. His words and wisdom after only 22 years, is something that will never leave my ears.

Listening to his voice for three hours is amazing. He has so much advice to give in which this is the perfect book to read when you need friendly advice from depression......to sexuality
ALL IN ALL AN AMAZING BOOK THAT MEANS ALOT TO SO MANY PEOPLE
Oh Connor if you read this which I doubt you will follow me on @Bradhenton thanks

I had no idea how much a simple book written by my role modle and inspiration (and favourite youtuber) could inspire me to go out an chase my dreams - even if i am 16 years old. The only this i can say is this book is raw and inspiring, and most - it speaks the truth.

The best book EVER!!

This book is inspirational and just gives you all the feels. I wanted to listen to connor read the story because it would be like a really long youtube video

Really can relate to his story I struggled with my sexuality in a really bad way but once i stopped caring or rather realized that other peoples opinions on my life don't matter i really felt amazing the best way id describe it is free. Think people like Connor who yes got lots of support when he came out but also had too deal with a massive amount of hate. Because of humans like connor franta I'm proud to be gay and always will be

buy all the copies

just go buy all of them now! it's so feel good inspirational BUY ALL THE COPIES NOW

Loved it, touched my soul and encouraged me

love it so much, no other book compares to this, and no words can describe how frantastic it was

this is the best and most perfect book ever. I'm glad i listened to it

Connor, I loved this book. As a sufferer of depression I was so inspired. I have recommended it to everyone. Thank you for your sincerity and openness. I hope there will be more.

I love this book so much!! EVERYONE LISTEN TO IT YOU WONT REGRET IT

Thank you Connor ❤️👍🎉 for sharing this with us all.....& now we all know your middle name haha

A treat for the soul. A salve for the heart💟. A wet stone for the mind.

Truly inspiration. Connors opinion on life is what any young adult is looking for. He gets it. Gets life. Gets the struggles. He is wise beyond his years. The best read for anyone out there.

This book, it made me laugh, shed a tear and reevaluate where I want to go in life.
Connor has a way with words that truly makes you think and view things in a new brighter light.
Thank you Connor Franta, truly thank you.