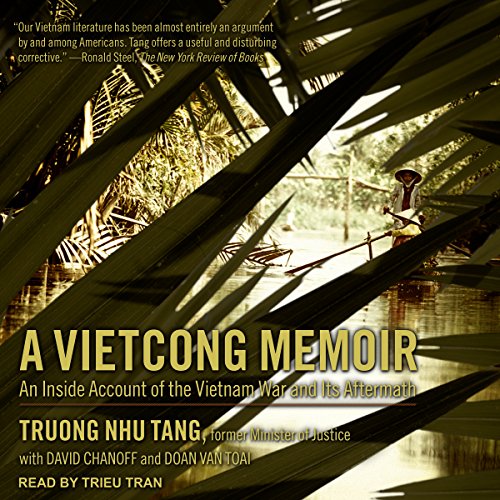 When he was a student in Paris, Truong Nhu Tang met Ho Chi Minh. Later he fought in the Vietnamese jungle and emerged as one of the major figures in the "fight for liberation" - and one of the most determined adversaries of the United States.

He became the Vietcong's Minister of Justice, but at the end of the war he fled the country in disillusionment and despair. He now lives in exile in Paris, the highest level official to have defected from Vietnam to the West. This is his candid, revealing, and unforgettable autobiography.

What listeners say about A Vietcong Memoir

This book is informative and thought provoking. Really enjoyed the information, however the accent of the reader was hard to understand.

A most eloquent and interesting account of a VC Politico. Worth the read, yet, considering the author was a priviledged; educated and self described nationalist, its hard to understand why he believed the communists would allow for an independent, reunified South Viet Nam. His naivete cost his father shame, his mother grief and his brothers "reeducation" /incarceration for years.
Owing to his stupidity, many South Vietnamese lost their freedom and many Americans lost their lives and treasure...
It would have been a fitting punishment for the author to have suffered under communist overlords for life rather than escaping to the West.
Vietnam Veteran 1972-1976

A must read for anyone who loves history

I love history and learning history from all perspectives. 5his book was insightful and eye opening.

What disappointed you about A Vietcong Memoir?

the book is basically about a bureaucrat who ran away when the shooting started and left other to die while he did so.

I am an avid interested follower of the the history of Vietnam history especially of the struggles of war I have read and listened to many books and documentaries from both side and I must say I give this book 6 out of 5 stars the twists and turns of this passionate patriotic man that steps thought the war.

Very helpful in understanding the cultural and political aspects and differences between the northern and southern liberationists, the divisions during the war ,and likely ,the harsh treatment of the southern communists after reunification .