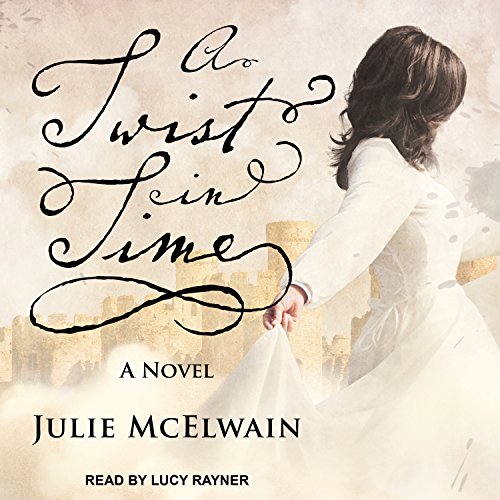 A Twist in Time

By: Julie McElwain
Narrated by: Lucy Rayner
Try for $0.00

Former FBI agent Kendra Donovan's attempts to return to the 21st century have failed, leaving her stuck at Aldridge Castle in 1815. And her problems have just begun: in London, the Duke of Aldridge's nephew Alec - Kendra's confidante and lover - has come under suspicion for murdering his former mistress, Lady Dover, who was found viciously stabbed with a stiletto, her face carved up in a bizarre and brutal way.

Lady Dover had plenty of secrets, and her past wasn't quite what she'd made it out to be. Nor is it entirely in the past - which becomes frighteningly clear when a crime lord emerges from London's seamy underbelly to threaten Alec. Joining forces with Bow Street Runner Sam Kelly, Kendra must navigate the treacherous 19th century while she picks through the strands of Lady Dover's life. As the noose tightens around Alec's neck, Kendra will do anything to save him, including following every twist and turn through London's glittering ballrooms, where deception is the norm-and any attempt to uncover the truth will get someone killed.

What listeners say about A Twist in Time

I loved the story as I did the first one in the series, A Muder in Time, but if the same narrator does the next book in the series, if there is one, I will not be purchasing the Audible version. I will give the kindle book five stars, but two stars is kind for the Audible version. The narrator reads the book so slowly that I had to increase the speed to 1.25x, which helped a little, but not much. Sorry, Lucy Raynor, but your narrating is just not my cup of tea.

Loved the story Hated the Narration

The story is great, I loved the first book as well but the narrator drove me nuts - every sentence was an exclamation! EVERY LAST ONE! UGH! Gave me a head ache and was hard to concentrate on the story. I did not think I would be able to listen to it but after several chapters I was able to focus better but it was still very annoying. Her voice rises and falls for EVERY SENTENCE so its not like you can turn down the volume - you will miss have of what she says......... very bad narration.

Good story - hard to listen to

The cadence of the reader is uneven. It's loud and piercing and one minute and low and quiet the next. It's very hard to listen to with headphones as you are constantly adjusting the volume to either hear the low voices or keep you ear drums from splitting at the high annoying parts.

The story is a fun and interesting tale and I enjoyed it very much!

Lovely story but the narration....(not so good)

I really enjoyed this book, The story is nicely paced and the concept alluring BUT...and that is a very big but, the narration is perfect when it comes to female voices and horribly grating when it comes to male. I takes a lot away from the book. In the end, it is still worth a listen, but be forwarned!

I just finished both audio books and loved them both!!! I'm proud to say I went to school with the author Julie and W0W, what a success Julie had become! I always knew she was a great talent in art but she definitely has the writing down too! The books were great, can't wait for the next one! Jill N👍👍👍👍👍

Great Story but I read the first book and listened to the second. It should not have been read in an English accent. Kendra's 21st century American thoughts should have sounded that way.

Very good book. Felt like I was there in the story. This would make a great movie!

The gripping story overcomes some unfortunate narration. I enjoyed the mystery and the characters a great deal. I'd recommend setting the speed at 1.3, it helps make the ridiculously ponderous narration a little more palatable.

A fabulous series to read. It's full of intrigue, historical information of what like was like in the early 19th century, and whimsy

I’ve really enjoyed this & the previous book although I did have to speed up the reading. I hope there’s a 3rd book!

This was JUST as good as book one and keeps a gripping pace...again I find the narration to be best at 1.25 speed as stops it sounding slow and drawled out.