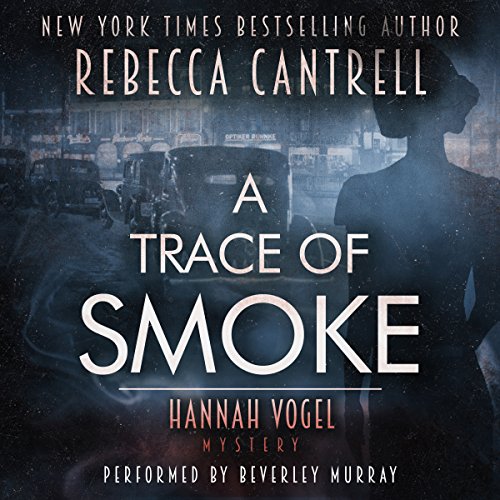 A Trace of Smoke

By: Rebecca Cantrell
Narrated by: Beverley Murray
Try for $0.00

It's 1931 in Berlin, and the world is on the precipice of change -- the affluent still dance in their gilded cages but more and more people are living under threat and poverty. Hannah Vogel is a crime reporter forced to write under the male pseudonym Peter Weill. As a widow of the Great War, she's used to doing what she must to survive. Her careful facade is threatened when she stumbles across a photograph of her brother in the Hall of the Unnamed Dead. Reluctant to make a formal identification until she has all the details, Hannah decides to investigate, herself. She must be cautious as Ernst's life as a cross-dressing cabaret star was ringed in scandal, and his list of lovers included at least one powerful leader in the Nazi party.

She's barely had a chance to begin before an endearing five-year-old orphan shows up on her doorstep holding a birth certificate listing her dead brother Ernst as his father, and calling Hannah 'Mother.' Further complicating matters are her evolving feelings for Boris Krause, a powerful banker whose world is the antithesis of Hannah's. Boris has built a solid wall preventing anyone from disturbing his, or his daughter Trudi's, perfectly managed lives -- a wall Hannah and Anton are slowly breaking down.

As Hannah digs, she discovers political intrigues and scandals touching the top ranks of the rising Nazi party. Fired from her job and on the run from Hitler's troops, she must protect herself and the little boy who has come to love her, but can she afford to find love for herself?

What listeners say about A Trace of Smoke

I fell in love with this audio, the narrator voice is so easy to listen to and so believable with all the characters. I especially liked that it was set in the past and enjoyed all the history along with the mistery and story. I have recommended it to others and look for more books from this author and narrator.

Well narrative of a great story. This book falls in line with the Tesla series.

A Trace of Smoke by Rebecca Cantrell is an outstanding well written historical fiction novel of one young widow’s struggle to survive in 1931 Berlin. It is perfect for fans of Jacqueline Winspear, Charles Todd, and Anne Perry.

The story begins when crime reporter Hannah Vogel discovers a photograph of her younger brother in the Hall of Unnamed Dead while looking for her next big story. Unwilling to make a formal ID until she knows what happened to her brother, she begins an investigation of her own. Questioning proves difficult as her brother was a cross dressing cabaret star where identities, lovers, and secrets are numerous. Hannah soon discovers that one of her brother’s affectionate admirers is none other than a powerful leader in the Nazi party. Needless to say, Hannah’s own life is soon in danger.

What I appreciated most about this story is nothing is sugar coated. The descriptions of post WWI Berlin were so detailed and realistic - from the poor living conditions, to the palpable fear of the working class, and of course, the degradation of women during this time period. Yet Hannah’s will and determination persevered (after experiencing a few broken bones and a split lip along the way). Plus, the lifestyle of Hannah’s brother reminded me of his female American counterparts in jazz clubs, where wealthy older benefactors kept the singers in a grand lifestyle, while at the same time the singers would enjoy the company and affections of much younger men on the side.

I listened to the audio version of this story narrated by Beverley Murray. Her narration was very enjoyable and she really bought the characters to life, using a variety of distinct voices. Thankfully this is the first book in the Hannah Vogel Mysteries and there are other books in the series to enjoy. Brava!

If I could give 10 stars I would. Loved the narrator. This book is simply amazing. Spend the credit, you won't be sorry.

This is a really interesting story set among the gay and trans underworld of pre-WW2 Germany but it’s badly let down by a narration which adopts exactly the same tone through out. Such a shame.