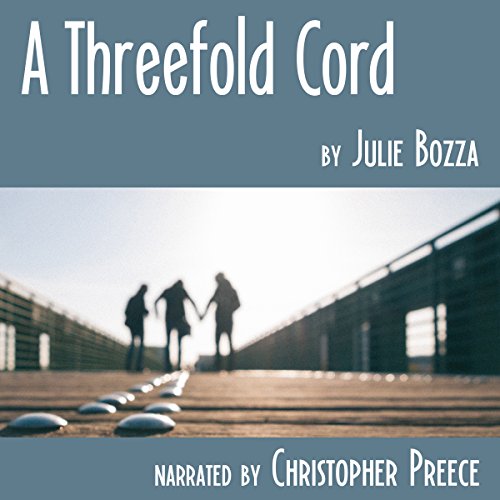 By: Julie Bozza
Narrated by: Christopher Preece
Try for $0.00

Grae Edwards and his co-stars Chris Willoughby and Ben Clyde work together well. Maybe they even have a chemistry. Certainly, they are friends, and Grae is tempted to ask for more.... After the beautiful tart Chris has the temerity to turn him down, Grae settles into a comfortable loving relationship with the more chivalrous Ben. But the idea of Chris never quite goes away - and when Chris finally suggests the three of them spend a night together, Grae glimpses a solution he hardly dares hope for.

What listeners say about A Threefold Cord

I loved this audiobook. I mean, three vibrant young British actors, those sexy British accents, and a ménage? What’s not to love?

Except this book is so much more than just a few salacious romps in the sack.

When Julie Bozza asked me to review “A Threefold Cord,” I immediately agreed – mostly because I’m an audio addict, but also because I was intrigued.

I have experience in the theatre and have some idea of the pressures, the tension, the long hours, the intense work, and the transitory relationships that are part of this milieu. Actors have to be flexible, often moving from job to job and even from location to location. Forming long-term relationships can be a challenge.

This story has three main characters but is entirely told in Grae’s point-of-view. I would have liked to know what dependable Ben and charismatic Chris were thinking at pivotal moments, but Grae was a reliable narrator. He navigated his way through the pitfalls and joys of being part of a triad. Because that’s what this is – a triad. Yes, there are hot ménage scenes in bed, but the men move into a relationship and that is the most interesting part of the book.

E.M. Forster’s book “Maurice” (pronounced Morris), plays a major role in Bozza’s book and my curiosity was piqued, sending me to the Internet. Not a necessity, for sure, but “Maurice” has a fascinating genesis and publication history. I won’t say more about this except framing the book in the second decade of the 21st century – 100 years after it was written – was brilliant. Theoretically, gay men are thought to have it easier than it was back in Forster’s time, but we all know it’s still not all smooth sailing.
There were times when I wished the descriptions were more evocative. I am drawn in by being part of the scene – scent, sound, taste, and, of course, sight. With three gorgeous men, I wanted to be pulled in by more than simple description. Maybe the lack is due to Grae as the protagonist because I suspect if we had Ben’s perspective, the language would have been lusher.

That being said, this story was well-written and I enjoyed it. Christopher Preece was the perfect narrator as far as I am concerned, but I’ll be honest and say most foreign voices are sexy to me. Ms. Bozza has other audiobooks I am eyeing and I highly recommend this one. Especially that British accent…