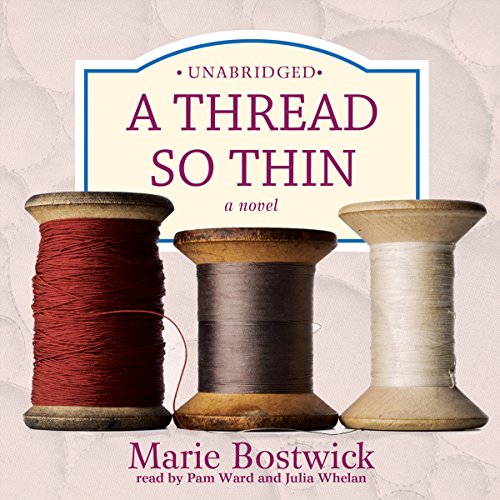 A Thread So Thin

By: Marie Bostwick
Narrated by: Pam Ward,Julia Whelan
Try for $0.00

New York Times best-selling author Marie Bostwick crafts a timeless tale of friendship, love, and the choices we must make in their name.

While New Bern, Connecticut, lies under a blanket of snow, Cobbled Court Quilts remains a cozy haven for its owner, Evelyn Dixon, and her friends. Evelyn relishes winter’s slower pace—besides, Internet sales are hopping, thanks to her son Garrett’s efforts. In addition to helping out at the shop, Garrett has also been patiently waiting for his girlfriend, Liza, to finish art school in New York City. But as much as Evelyn loves Liza, she wonders if it’s a good idea for her son to be so serious so soon with a young woman who’s just getting ready to spread her wings.

Liza’s wondering the same thing, especially after Garrett rolls out the red carpet for a super-romantic New Year’s Eve—complete with a marriage proposal. Garrett’s the closest thing to perfect she’s ever known, but what about her own imperfections? The only happy marriage Liza has ever seen is her aunt Abigail’s, and it took her decades to tie the knot. Soon Liza is not only struggling with her own fears but with the mixed reactions of her friends and family. And when she finds herself torn between a rare career opportunity and her love for Garrett, Liza must grasp at the thinnest of threads and pray it holds.

What listeners say about A Thread So Thin

I wanted to like this book but the main character, Liza is unlikable and depressing. The author talks too much about her previous book and spends too much time giving backstories on every character and every experience. I found myself fast forwarding towards the end of the book. I was hoping to have found a new author but this one isn’t it.

I love this series, but find the Lyla character so frustrating. I just want to yell at her. Guess that is the idea of a good storyline.

The least interesting was the indecision of Lyla

Love the series, wouldn't have wated to miss it

Where does A Thread So Thin rank among all the audiobooks you???ve listened to so far?

This is one of the best series I have ever purchased.

Which character ??? as performed by Pam Ward and Julia Whelan ??? was your favorite?

All of the characters are richly developed. They are not stereotypical but more like real friends. I really hated for the book to end.

These characters have been encouraging to me in my own sometimes difficult life. I find solace in listening to them as they resolve their struggles. They all feel like regular friends by the end of the book.

If you like the series, you’ll like the book. All the old favorites are back and it’s good to meet them again.

This story dragged for me, I literally skipped chapters near the end just to get there. The writing is good, the story was just too stretched, characters act completely out of character - which in some ways is fine - but when it takes half the book before anyone broaches the subject... well, like I said, drawn out.

Having said that, I love the writing style, I so enjoy how life lessons are so well worked into the stories - great perspectives and none of it comes off heavy handed.

Though this might not be my favorite of the series (then again, I made it through books 5-10 of WOT, so comparatively this was a breeze) but I’ll look forward to my next meeting of the quilt circle at Cobbled Court.

Would you listen to A Thread So Thin again? Why?

Yes,. It had movement and grit and touched my emotions in so many ways.

What was one of the most memorable moments of A Thread So Thin?

The point where Liza and Garrett, announce they wouldn't be getting married to the awaiting family.

Which character – as performed by Pam Ward and Julia Whelan – was your favorite?

When Liza comes to realization of her own fragility and stands up for herself again, without the wall of sarcasm and hurt. Just herself, broken, fragile, and unsure.

another great book by Marie Bostwick

I have enjoyed the continuation of the Cobbled Court Series. Again, Ms. Bostwick allows us to get to know these characters even more intimately and share in their joys and fears. She knows each person very well and gives voice to their changes through life. The narrators do a wonderful job of distinguishing each character as well.

The story line was a bit predictable - -I thought of where it was going long before we got there. Some of the characters were a bit naggy but that does fit with the story so it is OK. Over all was good. I'd recommend the series.

you will really enjoy this series. Enjoy the family and story ---
worth it. a nice easy story --

I feel like the characters in this book all became my friends. I miss them now that the book is done.I sure hope there will be another book in the future , so we can catch up with all these dear people.

This book was not for me. I read a few chapters and just couldn’t continue. Awful. Sappy. Ridiculous. Ugh.