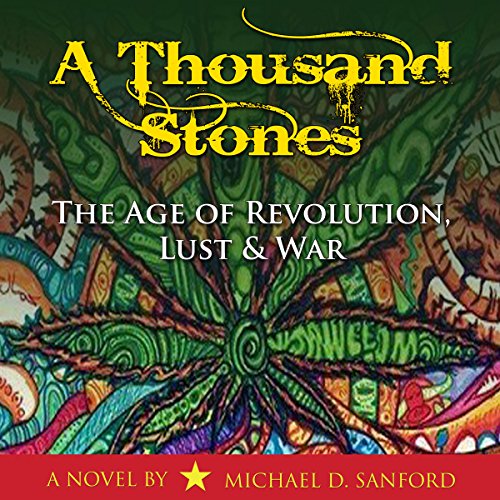 By: Michael D. Sanford
Narrated by: Nicholas Santasier
Try for $0.00

During the late 60s and early 70s, turbulence dominated both the world stage and the personal psyche of youth worldwide. It was an era of startling contrasts.

Who could make sense of it all? College students, of course!

A Thousand Stones is an historical fiction about both peaceful and militant students in the age of the Vietnam War, young love, criminal sabotage, and, of course, sex, drugs, and rock and roll. It is also an entertaining coming-of-age story about a 19-year old Texan, Nathan Davett Cooper ("Nate").

Europe was a magnet for the young and restless; Nate is both. He is presumed dead, along with 40 other Texas college students, in the crash of ICE Flight 54. Bodies wash ashore on the Normandy coast, amidst large clumps of grey-green paper wads: hundreds of thousands of dollars in US currency.

Infused with unusual travel adventures, seasoned with the songs of the times and the longings of early manhood, the story follows this young American, his revolutionary-minded gonzo-journalist best friend, Charlie, Custer, a worldly-wise hippie girlfriend of Charlie's, and others involved in the unfolding mystery of twin plane crashes, mystical Irish lore, a budding worldwide radical underground movement, and their surprising connections across time and space.

A Thousand Stones is a nostalgic look at what was happening between the Summer of Love, the Days of Rage, and Disco Dancing. It's both innovative and entertaining, blending little-known history, memorable fictional and historical characters, and an enrolling story into an amazing listen that will stay with you long after the end.

What listeners say about A Thousand Stones