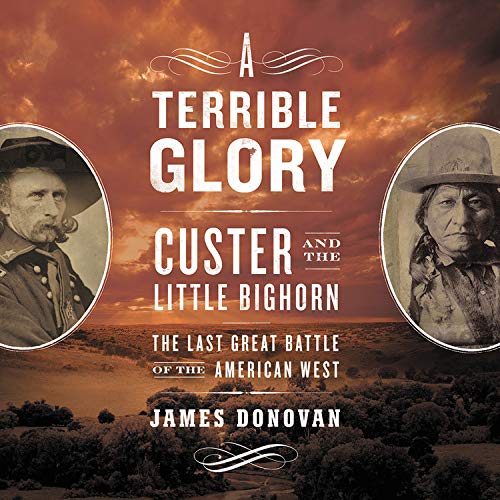 By: James Donovan
Narrated by: Jeff Bottoms
Try for $0.00

A rousing and meticulously researched account of the notorious Battle of Little Big Horn and its unforgettable cast of characters from Sitting Bull to Custer himself.

In June of 1876, on a desolate hill above a winding river called "the Little Bighorn", George Armstrong Custer and all 210 men under his direct command were annihilated by almost 2,000 Sioux and Cheyenne. The news of this devastating loss caused a public uproar, and those in positions of power promptly began to point fingers in order to avoid responsibility. Custer, who was conveniently dead, took the brunt of the blame.

The truth, however, was far more complex. A Terrible Glory is the first audiobook to relate the entire story of this endlessly fascinating battle and the first to call upon all the significant research and findings of the past 25 years - which have changed significantly how this controversial event is perceived. Furthermore, it is the first to bring to light the details of the US Army cover-up - and unravel one of the greatest mysteries in US military history.

Scrupulously researched, A Terrible Glory will stand as a landmark work. Brimming with authentic detail and an unforgettable cast of characters - from Sitting Bull and Crazy Horse to Ulysses Grant and Custer himself - this is history with the sweep of a great novel.

What listeners say about A Terrible Glory

This book "A Terrible Glory" was a very insightful unbiased view of Custer, his life and those around him. Told from the views of both the American Army and the Indians of the West. The book Shows exactly how and why the battle took place the way it did and gives details as to those involved and how they handled the battle. Both from a heroic and less than heroic standpoint.

Clearly, Custer was up against from the get go of the expedition of 1876, From lack of support in Washington and definite lack of support from his officers. That coupled with arrogance of invincibility on Custer's part caused the demise of nearly all of the 7th Calvary.

The narrator was very good, no worries in getting used to his voice, tone and definitely no problems with pronunciations of names and places, which is always a issue with me.

HIghly recommend this book to anyone interested Custer and the battle of the Little Big Horn. Also the PDF of maps included are a tremendous aide in following the armies movements. Only drawback here is the author attention to extreme detail can be a bit lengthy but It certainly does not deter from the excellent job done here

While listening to this history, you need a map and compass in your head. If you are not intimately familiar with the geography and landscape of the north central plains, it is difficult to imagine where each grou p is located and therefore who has the physical, geographic advantage.

Any fan of westerns or military history will enjoy the wonderful account, probably the most legendary battle next to the fabled spartan 300 or d day. Well done and read.

This author provides a historically objective and seemingly accurate telling of our nation's imperfect past.

Grabbed this title after visiting the battlefield last weekend. This book was on display there so wanting to know more listened to this on the drive home. First off the narrator was great. Was a little worried after reading a few negative comments regarding it but not sure why they were complaining. Just listen to the sample provided as it was all I needed to know those commenters must of been expecting Sir Lawrence Olivia.

The book itself was well researched and the author steered clear of conjecture or personal opinion. I appreciated that he didn’t state Custer’s death was a suicide as some do based on the reported gunshot wound to his head. Maybe it was but no no one survived that portion of the battle who was under his command.

Overall a great historical accounting of the event with context of people and events prior to the battle for context and it’s aftermath.

Wonderdully crafted narrative of not just the battle, but the lead up and aftermath as well. It was definitely easier to imagine and follow the timeline of those days after being to the battle site.

Lots of great detail and Inormation in this easy-to-listen read with a great narrator! Perfect for a visit to the Battlefield.

I don’t know a lot of the background of this battle or it’s aftermath. I did find the book interesting and, I think, unbiased. It certainly prompted me to want to understand this part of history better.

The author is descriptive and covers facts writing with tale of history that makes you enjoy history without being too dry.

Naration could have been better. I prefer readers who have clear precise diction, rather than slow mushy diction. Story was nothing new compared to all of the other books about George Armstrong Custer's Last Stand..

Very well structured, with plenty of information about Custer's training and early career and the events preceding the Black Hills Campaign, but thoroughly comprehensive in describing the lead up to the battle, the battle itself, and its aftermath. It may have benefitted by more closely examining the Indian perspective, regarding the battle's events, the behaviour in general of the US military, and what they thought of Custer himself.

Very interesting book flawed by the awful narration sound like he is reading it sat on the toilet!
No interest in his voice this should have been checked before sale might as well have a robot reading it