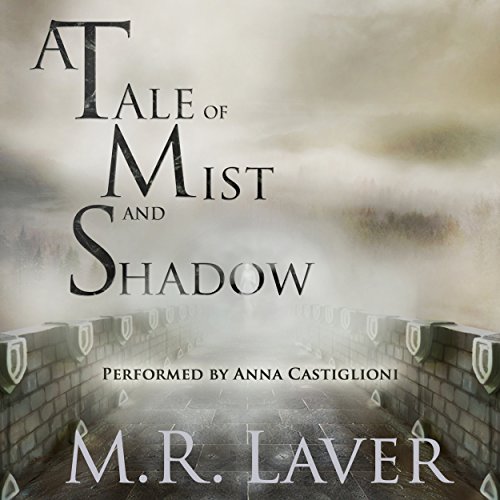 A Tale of Mist and Shadow

A Tale of Mist and Shadow

Shackled by dragon magic, Vorel is forced to protect a murderer who killed his own brother. Defying his curse to wander, that man uses Vorel's dutiful toil to settle in a land where monsters like himself roam. Welcome to Enoch's Pardon, a hidden town for criminals seeking refuge from the law.

Here, everyone's an illegal immigrant, most are terrorists, but all are accepted. In a community of monsters, peace teeters upon the keen edge of the mysterious Sheriff's deadly scythe. After 300 years it's still standing, because Vorel is still shackled. Streets will run red in Enoch's Pardon as dragons, demons, vampires, and witches clash in an eternal rivalry of blood. When the fog lifts, who will be left standing? All will hinge on those souls who can see through the haze. Those who see the light of life even in the dark are the true heroes.

Listen and you'll discover where fantasy and reality meet in a surprising dance of brutality and compassion. Be lights in the darkness and Step into the Fog.

Would you consider the audio edition of A Tale of Mist and Shadow to be better than the print version?

What other book might you compare A Tale of Mist and Shadow to and why?

Has elements from all sorts of fantasy novels

Anna copied the action of the speech .... ie if the sentence said the character laughed, Anna added a laugh, or a cough, etc.

No, it was difficult to get going, but at the end if was much easier to listen to.

I found the main character Cassandra to be childish, and spoiled rather than what I presume the author was trying for - a priestess who would do anything to further the glory or her deity. Her attitude of 'how dare they oppose me' should be coming from the deity itself. You would think the priestesses would try to convert people rather than call a vendetta down on anyone that opposes her.

The secondary plot of the war also is confusing - the torture of the prisoners of war - are they doing this for their deity, which is at odds with the basis of the army, since the temple army is only a fraction of the whole.

Once the author re-introduces Grace about halfway through, things start making more sense, and the story becomes a lot more enjoyable. Things are slowly revealed, but towards the end you start wondering if the author has abandoned Cassandra. The book might have worked better with alternating chapters with the two characters; the readers/listeners would have been able to see the weaving of the two storylines better. This would also have offset the irritation of Cassandra's character better.

By the end of the story, I was enjoying the book and fully engaged, and left interested enough to think about picking up the second book.

Second time through has been a treat!

I must admit, I'm writing this from a phone so it will brief.

This is now my second run through with M Lover's first book, the first being a very enjoyable experience, but now, having listened to the material, I have a new found appreciation for the story overall.

the narrator has done a fantastic job throughout most of the book. I found there to be only a few small inconsistencies with character voices, and some chosen tones seemed odd, but this is nearly all personal preference. Once she hit her stride, she didn't slow.

Fantastic book and performance. High fantasy readers give this a read!

If you like dragons mystery and Magic this book is for you.
I have read a lot of books in this genre but this one uses intricacies that the other books do not use. It's fun and refreshing to read a book that takes things a little bit out of the norm. You will love the way the caricatures interact with the world around them. I can not wait to read the rest of the books to see where the characters I have come to love end up.
I would recommend this book for teens and adults alike.