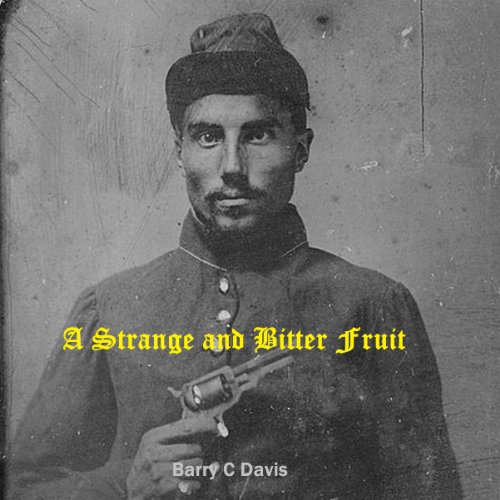 A Strange and Bitter Fruit

By: Barry Davis
Narrated by: Robert King Ross
Try for $0.00

A chilly spring night in rural South Carolina at the tail end of Reconstruction, the murder of innocents. This is the setting for the initial chapter of the historical thriller, A Strange and Bitter Fruit.

Thomas "Tee" Powell, 15, manages to escape as his family is lynched. His father, Zeke, mother Hessie and young sisters Lannie and Effie were hung to teach the blacks of Aiken that voting is not the right of the former slaves, not anymore.

He is angry, but instead of wildly lashing out at the Klansmen that murdered his family, he runs away. After a disastrous detour to Tallahassee, Tee joins the Army and ends up in the West, at a remote Army outpost on the lip of the Black Hills. Here, he grows up and begins to accept responsibility for his life and for the lives of others. After six years, the past, in the form of two of the Klansmen, one now a U.S. Senator on a mission to sign a treaty with the Indians, confronts him.

He had buried his past deep, even changing his last name. Now, he has to confront it head on, starting with the two killers that entered his fort. Trained by the Army to kill, Tee emerges from his exile and takes revenge on those that committed the murder of his family, beginning with the two men. His purpose is now clear, he must take revenge, and he proceeds ruthlessly to do so. But revenge has its own cost, and Tee suffers that price. Many innocent people are killed, and he struggles with the guilt.

A Strange and Bitter Fruit is the story of revenge and its consequences. It is a story of violence and race, a true American story. The book raises serious questions: Is there a limit on revenge? Is there an act so horrible that any response, no matter how vicious, is just?

A Strange and Bitter Fruit, although it takes place in the 19th Century, confronts the listener with many of the issues of race and violence that we continue to live with today.

What listeners say about A Strange and Bitter Fruit

Absolutely one of the best books I have read!!!!

amazing story on an important topic

GREAT story on a very important topic. the issues of slavery run deep! the authors epilogue said it best, as a country obsessed with terrorism we fail to acknowledge the terrorism visited on African Americans by whites during reconstruction.

Decent story. Too much head-hopping.

Enjoyed the chatacters. Especially Billy. Tee’s adventures felt real with good description. Narrator gave a good performance, injection character into the dialog. Biggest problem was the head-hopping point of view within scenes. At one point, the authur jumps into a hound’s head sniffing a “familiar scent.” Writing rules frown on head-hopping. Too distracting for the reader. Stick to one pov per scene.

Story was slow and I didn't like how the narrator was boxing the different characters. I couldn't figure out who was who.

A terrible time in our history.

I have read many books about slavery from many different authors. But I have to say that this story broke my heart. I would recommend this book to anyone who has lost sight of the terrible abominations that were done to the black American people. I have to say though, I wish it would have ended on a happier note. I guess I like, "and they lived happily ever after. "