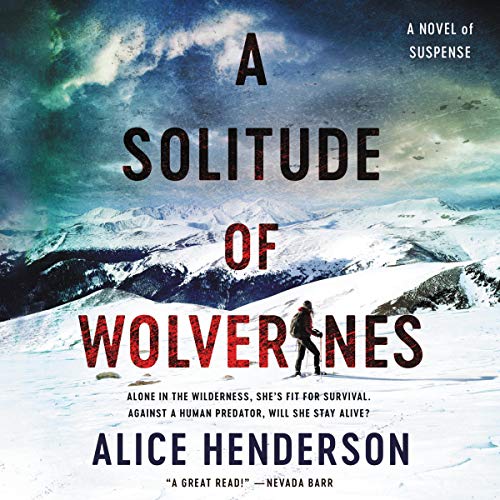 A Solitude of Wolverines: A Novel of Suspense

By: Alice Henderson
Narrated by: Eva Kaminsky
Try for $0.00

“Both a mystery and a survival story, here is a novel written with a naturalist’s eye for detail and an unrelenting pace. It reminded me of the best of Nevada Barr… It’s so fraught with excitement and wondrous details that it demands to be read in one sitting and savored afterward. Don’t miss it.” (James Rollins, number one New York Times best-selling author of The Last Odyssey)

The first book in a thrilling series featuring a wildlife biologist who courts trouble as she saves endangered species...and a mysterious killer who buries his dead in the land she helps preserve - a fast-paced, action-driven tale of suspense with the atmosphere and propulsive tension of works by Jane Harper, C. J. Box, William Kent Krueger, and Nevada Barr.

While studying wolverines on a wildlife sanctuary in Montana, biologist Alex Carter is run off the road and threatened by locals determined to force her off the land.

Undeterred in her mission to help save this threatened species, Alex tracks wolverines on foot and by cameras positioned in remote regions of the preserve. But when she reviews the photos, she discovers disturbing images of an animal of a different kind: a severely injured man seemingly lost and wandering in the wilds.

After searches for the unknown man come up empty, local law enforcement is strangely set on dismissing the case altogether, raising Alex’s suspicions. Then another invasive predator trespasses onto the preserve. The hunter turns out to be another human - and the prey is the wildlife biologist herself. Alex realizes too late that she has seen too much - she's stumbled onto a far-reaching illegal operation and now has become the biggest threat.

In this wild and dangerous landscape, Alex’s life depends on staying one step ahead - using all she knows about the animal world and what it takes to win the brutal battle for survival.

What listeners say about A Solitude of Wolverines: A Novel of Suspense

I really enjoyed this first book in a new series. reminds me of the Joe Pickett series of CJ Box. looking forward to more!

Oh so good. Female lead that is so bad ass. My environmental heart so enjoyed reading work done to save wolverines and the the danger was scary thrilling. Girl is smart, tough and exciting as she survives.

The main character just happens to possess a bunch of very specific skills that magically come in handy through the book. I still enjoyed it though :)

It started out interesting but then turned into the main character acting like she was in a mission impossible movie. Shooting. Rigging up a snow plane. Rigging tnt for explosions to kill the dudes chasing her. And swinging around on a ski lift wire from lift to lift.... the author musta been watching a spy movie when writing this book.

Unfortunately this story line is so far fetched that in my opinion its is unbelievable. The heroine (superwoman) : just happens to get an offer of a job in the wilderness hours after an attempt on her life; is allowed to carry out a research project single handed in the wilds of Montana; her ex boyfriend just appears out of nowhere to break up with her; there is a shed on a ranch with not one by numerous endangered species including elephants waiting for hunters!!!!! Pity because some of the descriptive passages were good.

I really enjoyed this book in terms of it being exciting, and a good narration. I loved the setting and the descriptions of wildlife. I was quickly invested in the character and found it hard to hit pause during certain parts. If there is a sequel I will definitely read/listen to it.

There were a few parts that didn't quite work for me. I love a tough female protagonist who can hold her own, but the main character seems to have an amazing array of skills and knowledge. Sometimes this worked, and other times it felt too easy, particularly for a character that is meant to be a 'civilian'. I do feel like there was some hint this could be developed on in future books, though.

The end was a little rushed, and the novel could have afforded to take its time a bit more. I loved the amount of action in the book, it felt more like action and less like suspense to me.

I feel like there is a lot of potential for the character in future books.

I so enjoyed this book for start to finish, cant wait to read the next in the series