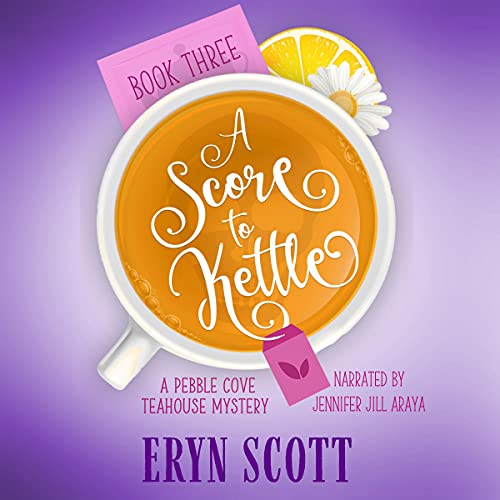 A Score to Kettle

By: Eryn Scott
Narrated by: Jennifer Jill Araya
Try for $0.00

Pebble Cove residents were wary of the new commune at The Pines, even before someone ended up dead.

Rosemary is excited to cater her first event at the newly opened commune’s full moon festival. When a young woman is found murdered in her yurt, it’s clear these rich wannabe hippies aren’t as peaceful as they pretend.

As the investigation unfolds, Rosemary realizes these commune members have more secrets than they do trust funds. She can’t help but feel Chief Clemenson is, again, one step behind.

In addition to working the case, being at The Pines provides the perfect opportunity to investigate Asher’s death. Solving any mystery is difficult; solving one over a century old seems almost impossible. But just as Rosemary starts to make headway in both cases, a violent storm rolls in from the sea. Will the wind and rain wash away any hope of finding the murderer?

What listeners say about A Score to Kettle

Love this series and I love the way Ms. Araya reads it!!! I highly recommended!

The only thing I didn't like was the cliff hanger at the end, grrr! Again, the author and narrator pair well together to bring this book alive. I loose all concept of time when I crawl inside this book. I was given this free review copy audiobook at my request and have voluntarily left this review.

Why was Clover killed?

This is book three in the Pebble Cove Teahouse Mystery series. I like that the commune/yurt at The Pines gives the perfect cover to investigate Asher’s death.
Unfortunately, Rosemary’s catering gig leads to a dead body on the premise. In trying to discover the killer, we find out more about the Sullivan family and their ancestors.
I like that Rosemary is not written as a naïve sleuth. I like Asher’s back story. Will he ever find out the truth surrounding his death? What is his unfinished business?
Looking forward to the next in the series.

The narrator did a wonderful job.

What a delightful cozy! Yeah, it's got ghosts, so it falls into the paranormal sub-genre, but other than that you won't have to deal with any other creature, and who doesn't appreciate a good ghost story? The book takes place right on the beautiful Oregon coast, about an hour drive outside of Portland, and is yet another reason to lose yourself in the scenic landscape of the story!  The mayor is a cat (yes, that's a thing, to all you doubters!) Plus, to top it off, the Teahouse (Tea by the Sea) doubles as the place where the book club meets! For me that's a Win, Win, Win, Win!
Rosmary may have bitten off more than she can chew as she dives into the newest murder at Pebble Cove, and of course, she's still working the cold case, trying to uncover who murdered her best friend and aly!
Jennifer Jill Araya is absolutely marvelous here, and gives a beautifully nuanced performance as narrator!