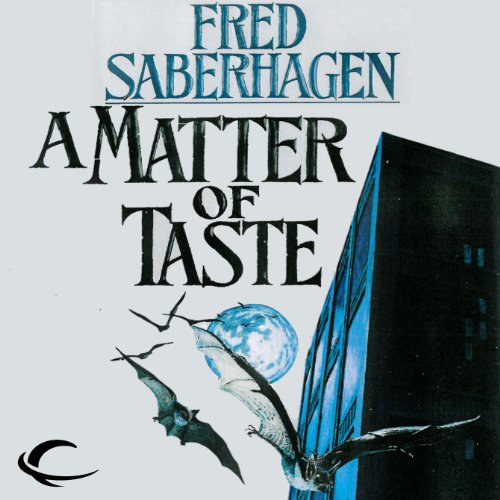 A Matter of Taste

By: Fred Saberhagen
Narrated by: Robin Bloodworth
Try for $0.00

He was once called Dracula, but in Chicago in our day he is known as Matthew Maule. John Southerland, like the rest of the Southerland family, calls him Uncle Matthew. After all he's an Old Friend of the Family and he has risked his un-life more than once to protect the Southerlands. But with Matthew rendered comatose by a fiendish plot from beyond time, the Southerlands must rise to his defense - and battle 500 years’ worth of Dracula's enemies.

What listeners say about A Matter of Taste

And you thought your family had problems!

Where does A Matter of Taste rank among all the audiobooks you’ve listened to so far?

This is probably in my top three favorite audio books up there with The Dracula Tape and An Old Friend of the Family.

What other book might you compare A Matter of Taste to and why?

Oh, I think he does an excellent job reading as Dracula. He adds the right inflection and provides voices for the characters.

One part that had me nearly laugh out loud is when Jonathan is having a cryptic conversation with Dracula in front of his fiance, trying to persuade Dracula into revealing who and what he is to her (as Dracula is the family protector / stalker). And Dracula's response is "Why? I'm not marrying her."

I also love the flashback of when Dracula first became a vampire, it's probably one of the better origin stories for the vampire.

The character claims it was a transcendent act of will that he refused to die, swearing not to die until he could avenge himself against his killers (he never could). In reality though it seems even he isn't entirely sure as to how he really became a vampire.

This one features Cesare Borgia as the main antagonist. Yes, the historical figure who is now currently a very attractive major character in Showtime's The Borgias.

This book also touches on the mystery of how Dracula became a vampire in a more interesting way than most films have it and not with the obnoxious ham-handed religious backstrokes you see in a lot of recent Dracula incarnations that go over the top.

This novel and An old friend of the family are the main reasons I feel this book series would make a great TV series.

Side note: I noticed Audible only has nine of the books listed. I hope they realize there are actually ten in the series. The last one is called A Coldness In The Blood but I don't see that one listed. I'm eager to hear that one turned into an audiobook.

I like how this story involves the main family again. I also enjoy hearing about ancient Florence. This story also speaks more about how Vlad became a vampire and that is definitely worth a listen. All and all I enjoyed this book and will be buying the next one