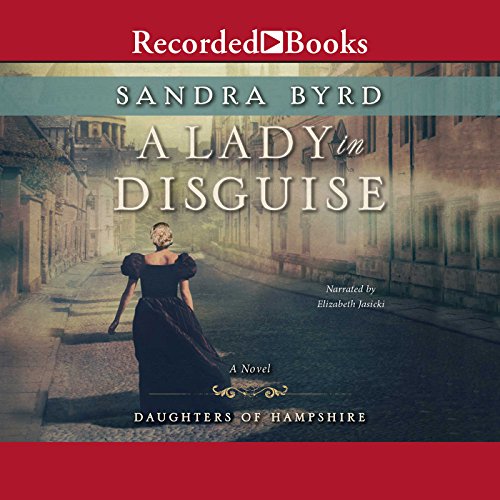 A Lady in Disguise

By: Sandra Byrd
Narrated by: Elizabeth Jasicki
Try for $0.00

In this intriguing novel of romance, mystery, and clever disguise set in Victorian England, a young woman investigates the murder of her own father.

After the mysterious death of her father, Miss Gillian Young takes a new job as the principal costume designer at the renowned Theatre Royal, Drury Lane. But while she remembers her father as a kind, well-respected man of the Police Force, clues she uncovers indicate he'd been living a double life: a haunting photograph of a young woman, train stubs for secret trips just before his death, and a receipt for a large sum of money. Are these items evidence of her father's guilty secrets? His longtime police partner thinks so.

Then Gillian meets the dashing Viscount Thomas Lockwood. Their attraction is instant and inescapable. As their romantic involvement grows, Gillian begins to suspect even Lockwood's motives. Does Lord Lockwood truly love her? Or is his interest a front for the desire to own her newly inherited property? And what should she make of her friend's suggestion that Lockwood or men like him were involved in the murder of her father?

Soon Gillian is convinced that her father has left evidence somewhere that can prove his innocence and reveal the guilty party. But someone wants to stop her from discovering it. The closer she comes to uncovering it, the more menacing her opposition grows. With her life on the line, Gillian takes on an ingenious disguise and takes on the role of a lifetime to reveal the true killer - before it's too late both for her and for those that she loves.

What listeners say about A Lady in Disguise

A Lady in Disguise by Sarah Byrd is the last book in the Daughters of Hampshire trilogy. I have not read the first two books; however, I don’t think you need to have read them in order to understand book three. From what I gather the books are loosely tied together.

Additionally, I found the heroine mealy-mouthed and frankly too indecisive. I don’t begrudge her not trusting people but at some point, you have to choose to either trust or not trust. The back and forth, especially with the hero, became annoying after a while. Especially because we never got any notion that he wanted to harm her. She questioned whether he wanted to be with her because of her inheritance but frankly, she could have just asked as she ended up doing later on the book. The whole thing became more and more exasperating as we got towards the end.

Also, it’s called A Lady in Disguise, but the lady was only ever in disguise in two scenes. I get the double meaning of having her have a middle-class upbringing but being/ becoming a lady/her mother was a lady but it kind of doesn’t work. If she was going to be “in disguise” she should have been in disguise a good portion of the book.

Finally, there’s a lot of Christianity in the book. At first it was okay, more or less fitting into the story but then it got very heavy-handed towards the end. I’m not religious but it doesn’t bother me when there’s spirituality in a story if well done and part of the actual story. It should come naturally in the story, it shouldn’t feel like you are being preached at.

The ending also gets kind of corny. I really just wanted it to be over by the end. This book should have been a DNF but I still struggle with letting books go.

Great book in a great series!

I loved this series and a Lady in Disquise was a wonderful conclusion. All of the stories were well written, engaging, and satisfying. Elizabeth Jasicki is one of my favorite narrators and she does a superb job.

This narrator is the best with all the different voices! The story was fresh and intriguing.

The narration by Elizabeth J. brought the characters to life and intense emotion to a plot of supreme quality. I just found my favorite book!

I enjoyed it very much ! It was a finely spun tale. nail biter at times!

If you enjoy Gothic-mystery-romance, this book is for you! A perfect balance of romance and suspense with very likable and well-developed characters. The narration by Elizabeth Jasicki is superb. I am really looking forward to other works by both the author and the reader. Highly recommended, a delicious reading treat in this genre.