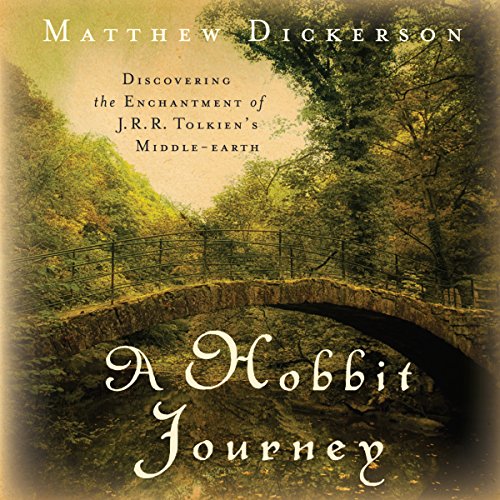 By: Matthew Dickerson
Narrated by: Alan Sklar
Try for $0.00

The Lord of the Rings trilogy has delighted millions of fans worldwide in book and movie form. With the theatrical release of the two-part film The Hobbit slated for 2012 and 2013, attention will once again turn to J. R. R. Tolkien's classic works. In a culture where truth is relative and morality is viewed as old-fashioned, we welcome the chance to view the world through hobbit eyes: we have free will, our choices matter, and living a morally heroic life is possible.

In this engaging and thought-provoking book, Tolkien expert Matthew Dickerson shows how a Christian worldview and Christian themes undergird Tolkien's Middle-earth writings and how they are fundamentally important to understanding his vision. This revised and expanded edition of Following Gandalf includes new material on torture, social justice, and the importance of the body.

"What are the costs of military victory? Is mercy sometimes too expensive? Can torture ever be justified? Are there any moral absolutes in a world of competing faiths and cultures? A Hobbit Journey traces these and many other issues through their surprisingly detailed presentation in Tolkien’s fiction. If anyone should still doubt Tolkien’s applicability and relevance to the 21st century, this is the book to put in their hands." (Thomas Shippey, author of J.R.R. Tolkien: Author of the Century)
"J.R.R. Tolkien’s stories are countries full of treasure that will go undiscovered and unappreciated unless we learn how to be attentive treasure hunters. Matthew Dickerson writes as one who has spent his summers in the Shire, hiked every trail in Mirkwood Forest, taken counsel from Gandalf, and argued with Gollum and Smaug. It’s as though he sharpened the tools of his intellect in deep conversation with Tolkien himself. He will prove to be a thought-provoking guide through Middle-earth whether you’re a frequent visitor there or a newcomer ready for the adventure of a lifetime." (Jeffrey Overstreet, author of Auralia’s Colors and Through a Screen Darkly)
" A Hobbit Journey instantly engages readers with its combination of scholarly knowledge and love for J.R.R. Tolkien’s work. Matthew Dickerson resists imposing his own rigid, limiting thesis and instead interprets the text by simply pointing out to fellow readers what is there. In doing so, he illuminates the power of Tolkien’s stories to challenge, delight, and transform us." (Colin Duriez, author of Tolkien and C.S. Lewis: The Gift of Friendship and J.R.R. Tolkien: The Making of a Legend)

What listeners say about A Hobbit Journey

Yes, I would edit it to be about 30 minutes total instead of hours. The author takes one point and beats it to death. His basic premise is that Tolkien was a pacifist who was able to realize, because of his experience during World War I ('The Great War') that no human being (or elf or valar, etc.) has a right to kill another or even to coerce another person. Having proved that to his own satisfaction, he cites passage after wearisome passage in an attempt to convince the reader of his thesis.

What was most disappointing about Matthew Dickerson’s story?

See above. He didn't talk about anything 'enchanting,' about Middle Earth. He just used his platform to try to prove that Tolkien wouldn't hurt a flea, ignoring all sorts of evidence to the contrary.

The narrator has a soft, baritone voice. He also speaks v-e-r-y s-l-o-w-l-y, so I put my device on 1.25 speed and it because more tolerable. I keep listening in hopes that the author will pull it all together in the last chapter so I won't feel like I wasted all this time.

Was A Hobbit Journey worth the listening time?

No, not with almost 90% completed. I keep hoping.

Save your money and your time unless you want to be told time and again the same thing.

Would you consider the audio edition of A Hobbit Journey to be better than the print version?

No. I still enjoy holding a real book in my hands but I also enjoy audiobooks when I drive because there isn't much to listen to on the radio.

What was one of the most memorable moments of A Hobbit Journey?

The whole book is memorable.

Which character – as performed by Alan Sklar – was your favorite?

This book is highly recommended for anyone who is serious about J.R.R Tolkien and his works. It plunges deep into the meaning behind his books and how they match the greatness of the old myths. Like the old myths, Tolkien's books are a treasury of wisdom in the art of living.

The previous review gave me pause of getting this book but I chose to try it.This is my overview.I am in sympathy with his strong words about the very true fact that this writer is dealing with war and torture and again and again returning to it.I, who am as shell shocked from the left in our culture as the next person, felt a very strong desire to stop this book when in the 2 chapter WATERBORDING came up.However,I realize that is about our media .So I continued listening.I quickly realized the writer is NOT left.nor right.NOT A PACIFIST.What he does is open up and detail Tolkiens Catholic views of morality and position on war and treatment of each other within and revield through The Lord of The rings.[without any admitting the Christian origin]...In fact this book is not about war at all but MORALITY.I do not think the author even knows Its actualy Catholic social doctrine.. If he does he almost seems to hide this fact,,I dont know him or his motives and like his book so i leave that to him..Tolkien was a devout Catholic so his moral wisdom would permiate his books.....anyway,if you are interested in a very good treatment of Tolkien and the Moral wisdom of his great works,I think you will like this treatment..but I do have to say ..'boy was this a terribly TITLED book';....