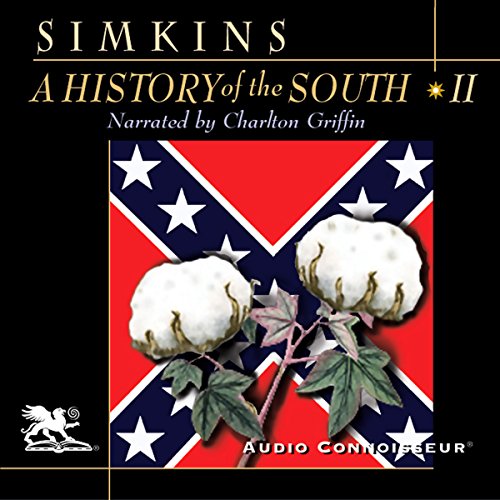 A History of the South, Volume 2

By: Francis Butler Simkins
Narrated by: Charlton Griffin
Try for $0.00

In Volume 2: The Kingdom of Cotton, the economic and social forces that doomed the South are fully explored. As the textile factories of New England and Europe spring up, they create an insatiable demand for cotton. When Eli Whitney's invention appears, it unleashes the equivalent of a gold rush in the South. In spite of the heroic efforts of Northern and Southern statesmen over a period of 40 years, the regions have moved too far apart. And when war comes, the South is totally unprepared. F.B. Simkins reveals the shocking inadequacies that plagued the Southerners, both diplomatically and economically.

The bare knuckle exploration of Reconstruction and its aftermath is some of the greatest historical writing ever produced by an American scholar, and Simkins demonstrates how the modern South was shaped by it. He delves into the political and religious underpinnings of white supremacy, what sustained it, and how it shaped the rest of the nation. He discusses the agrarian revolt which followed the success of Southern textile mills and follows this up with a look at what he terms "cultural protestantism" and shows how it continued to dog the social and intellectual fiber of the region across all class lines.

With the triumph of white supremacy in the 1890s it appeared that the South had simply adjusted itself to the new economic realities with a minimum of social change. But blacks in the twentieth century would have something to say about this.

A History of the South concludes in Volume 3: The Crucible of Modernism.

What listeners say about A History of the South, Volume 2

The rebel flag on the cover of this book made me at first worry it might be some sort of pro-South panegyric. So I looked up Francis Butler Simkins, and while the information I could find on him is scant, it appears he was part of a mid-twentieth century movement of southern intellectuals seeking to tell the truth about the South. In 1955, when this book was written, this may put him in the same camp as the Civil Rights movement.

Today, the book is striking for how much attention is paid to the experiences of white people at the expense of Native Americans and blacks. This is not to say the experiences of slaves, and later freed men and women, are ignored. They are just not placed center-stage as is common today. For people like myself seeking to understand the roots of American racism, as they arose from the culture of slavery, this is not altogether bad. Simkins has helped me to understand the deep forces in southern society that drove the system of slavery and later Jim Crow.

The History of the South is a comprehensive and serious history. It is academic in the sense that it looks at historical events from every available viewpoint and, having gathered the relevant information, seeks to draw from it new insights. In this sense, it is highly successful. For those seeking a more narrative history, I would encourage you to give this a chance, for through it you may come away with vastly greater insights than from say a biography of Robert E. Lee or a slave narrative like that of Frederick Douglass.

I imagine two sorts of people who may read a book like this: those who love the South and those who hate it. The beauty of this book, like the best of so many history books, is that it will help you to understand why people did what they did. Through such a history you can become a far better critic of the South as well as a better member of southern society.

In the first volume, Simkins covers the Spanish explorations of the South, the first colonies, the establishment of the Tidewater culture of Virginia, the origins of the Deep South in South Carolina, and the culture of Charlestown, the largest city in the Deep South. He also covers the various cultures associated with rice, cotton, sugar, and tobacco plantations as well as the the poor white non-slave holding backcountry. He covers politics, economics, society, and the arts, and I find his understanding of how economics influences society and politics to be outstanding.

The second volume covers the build up to the Civil War, the socio-economic impact of the war, Reconstruction, the early construction of Jim Crow, and the roots of the New South in late nineteenth century industrialization. If you are not already deeply familiar with this history, you will learn a lot. Both of these volumes are chock full of information and perspectives that are rarely given attention.

So far as the reading goes, I class Charlton Griffin with other actors, who have weird pretentious accents that bother me. Apparently, other people think his readings of other books are incredible - go figure. The audiobook is also a little odd in that all of the quotes are done with reverb. At first it was laugh out loud funny. Then I got used to this bizarre evolutionary line of audiobook production that thankfully has passed from the scene. Whatever the case, Richard Nixon could have read this book in a kennel and it would have still been worth the listen.