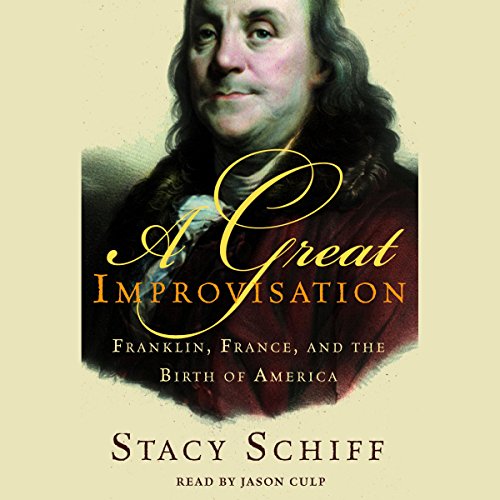 By: Stacy Schiff
Narrated by: Susan Denaker
Try for $0.00

In this dazzling work of history, a Pulitzer Prize-winning author follows Benjamin Franklin to France for the crowning achievement of his career.

"In December of 1776 a small boat delivered an old man to France." So begins an enthralling narrative account of how Benjamin Franklin - 70 years old, without any diplomatic training, and possessed of the most rudimentary French - convinced France, an absolute monarchy, to underwrite America's experiment in democracy.

When Franklin stepped onto French soil, he well understood he was embarking on the greatest gamble of his career. By virtue of fame, charisma, and ingenuity, Franklin outmaneuvered British spies, French informers, and hostile colleagues; engineered the Franco-American alliance of l778; and helped to negotiate the peace of l783. The eight-year French mission stands not only as Franklin's most vital service to his country but as the most revealing of the man.

In A Great Improvisation, Stacy Schiff draws from new and little-known sources to illuminate the least-explored part of Franklin's life. Here is an unfamiliar, unforgettable chapter of the Revolution, a rousing tale of American infighting, and the treacherous backroom dealings at Versailles that would propel George Washington from near decimation at Valley Forge to victory at Yorktown. From this audiobook emerges a particularly human and yet fiercely determined Founding Father, as well as a profound sense of how fragile, improvisational, and international was our country's bid for independence.

What listeners say about A Great Improvisation

Great book written with a perfect use of language and impressive composition. It’s not just a biography but a work of art. I enjoyed the performance and content with profound admiration to the author.

I'm not sure. I found the prose to be overly pretentious. There was much use of "big" words, e.g., disingenuous, duplicitous, etc. Not that I or anyone who would be attracted to this book would not know them, but unnecessary and less direct than simpler language.

If you’ve listened to books by Stacy Schiff before, how does this one compare?

I loved Cleopatra, a Life, and felt that it gave me great insight into the times in which she lived, and, more importantly, insight into the connections between characters (Plutarch, Augustus, etc.) whose names were familiar to me.

Would you be willing to try another one of Susan Denaker’s performances?

I was disappointed that the book seemed so pretentious and that it was disjointed due to the fact that it jumped forward and backward in time and was difficult to know "when" we were in the narrative.

Where was the editor?

What disappointed you about A Great Improvisation?

If the book were less than half as long, it might have been interesting.
It is filled with so many verbose descriptions of the bickering between the many people involved as well as far too much mundane detail. In the end the fascinating moments are drowned out by it all.

I'm sure there was a good tale buried in there somewhere.