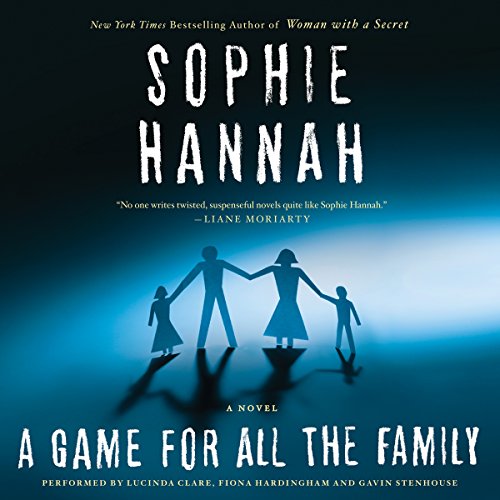 A Game for All the Family

Pulled into a deadly game of deception, secrets, and lies, a woman must find the truth in order to defeat a mysterious opponent, protect her daughter, and save her own life in this dazzling standalone psychological thriller with an unforgettable ending from the New York Times best-selling author of Woman with a Secret and The Monogram Murders.

You thought you knew who you were. A stranger knows better.

You've left the city - and the career that nearly destroyed you - for a fresh start on the coast. But trouble begins when your daughter withdraws after her new best friend, George, is unfairly expelled from school.

You beg the principal to reconsider, only to be told that George hasn't been expelled. Because there is - and was - no George.

Who is lying? Who is real? Who is in danger? Who is in control? As you search for answers, the anonymous calls begin - a stranger who insists that you and she share a traumatic past and a guilty secret. And then the caller threatens your life....

What listeners say about A Game for All the Family

Here is something di#erent. ( I've had good luck thus last month.) This starts off funny with our gal in the trenches having just quit work to enjoy doing nothing. Slowly a speed bump grows on her path while I try not to laugh so much in case the book is not
meant to be humorous. I did get tired of The Mystery as it slowly developed but overall this book is worth buying.

this book was the strangest book I’ve ever read. I was expecting the 2 stories to come together for a big ah ha moment that would make reading it worth while. Sadly, that didn’t come for me. Really disappointed that I invested so much time in this one.

I have been a huge Sophie Hannah fan for years now. I don't think her style of writing is necessarily for everyone but I love it. She builds up a suspense and an incredible mystery, granted sometimes the out come is very implausible but the ride is fantastic. I loved the different style of narration between the main story and the story-within-a-story. The energy was fantastic and the narration suited the characters very well. It felt as though I were listening to an old-fashioned radio program and not a narrated audio book. I have read several reviews where readers complain about how "unrealistic" the outcome is and it's true, several of her plot lines tend to end up a bit far-fetched but that shouldn't detour from the fantastic prose and the solid mystery that makes you desperate to find out just why all of it is happening!

Absolutely the worst yet

So tired of getting rotten books that I doubt I'll renew Audible next year. This one will give you a headache to boot with the readers high pitched squeaky voice. I tried 4 times to get thru this! I'm not picky as try at least 2 books a week but this was exceptionally bad.

Sophie Hannah has done it again! Although I love the Zeiler/Waterhouse mysterios, I have to say, this one is an excellent if different type of story. It reflects the influence of agatha Christie especially in the scene where all the characters are gathered in a room and a Poirot like policeman holds forth as to possibly murder scenarios. The language is impeccable. This is one not to be missed!

The story is a bit difficult to follow and very far fetched once you figure out what is happening. Wait until it goes on sale if you really want to read it.

There are two stories in this unusual book. The stories intermingle at some point. Both are uninteresting and foolish. Not one of her best.