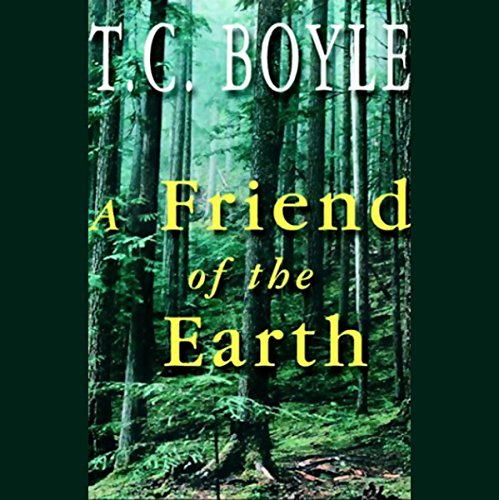 A Friend of the Earth

A Friend of the Earth opens in the year 2025, as Tyrone O'Shaughnessy Tidewater ekes out a bleak living in southern California, managing a rock star's private menagerie. Global warming is a reality. The biosphere has collapsed and most of the major mammalian species are extinct.

Once Ty was so seriously committed to environmental causes that he became an ecoterrorist and convicted felon. Once he unwittingly endangered both his daughter, Sierra, and his wife, Andrea. Now when he's just trying to survive, Andrea comes back into his life. What happens as the two slip into a reborn involvement makes for a gripping and topical story told in Boyle's uniquely funny and serious voice.

"Funny and touching, antic and affecting . . . while Boyle''s humor is as black as ever, he demonstrates that satire can coexist with psychological realism, comedy with compassion." (Michiko Kakutani, The New York Times)
"As disaster tales go, this is a sly, hip one...Boyle has always liked to play circus barker for life's extremes and what better freak show than the environmental apocalypse itself?" ( The Washington Post)
"Both entertaining and informative...hits like a warning shot from twenty-five years into the future." ( Chicago Tribune)

What listeners say about A Friend of the Earth

If you're aware of enviromental problems this book will make perfect and scarey sense. Plus, boyle's great writing makes this a can't-put-down book (listen).

I really liked "Talk Talk" so I listened to all of TC Boyle's audio books. This one was ok. It seemed a little too dark for me. There's no true hero and lots of villians, to put it bluntly. But, its still worth a credit.

I could not get through this book simply because of the over-heated style of the narrator. The story was swamped by the endless emoting and all subtlety lost in the melodramatic pitch. What a shame.

A commendable attempt to focus attention on the evils of global warming, deforestation, extinction of animal species. But is it realistic to portray the world as its portrayed here in 2025? I think its more fantasy. I don't understand how with all the horrors the population of the world is up to 18 billion. Also there's no mention of oil/gas shortages I can recall. Tidewater's behavior goes beyond the extreme into out of touch with reality.
I'd call this book a miss. Of the 4 Boyle books I've read or heard The Tortilla Curtain is the best.

The animals need us more today than ever.
A very fun listen with some tears too.

everything I have read by TC Boyle has been extraordinary and this is no exception. The moral is not for the faint of heart.

Not my favorite from Boyle

I'm a big fan of Boyle so was surprised that I didn't think this one was as great as others. Flipped back and forth in time so much it was difficult to piece together the story. Or was it that Boyle didn't narrate. That I think is much of the charm of the other Boyle audible books.

TC Boyle creates a world after a slow, not-quite-apocalypse that seems completely plausible both in terms of culture and nature. We have worn the Earth out like a ragged pair of jeans and humanity is limping along pretending it's wearing a tuxedo as the pants fall off in the dirt. Probably not the best book for optimists and book clubs, unless the book club members have a little grit. SUPER book for anyone who is interested in humanity's impact on the environment, in moral philosophy, or just a thought-provoking yarn.