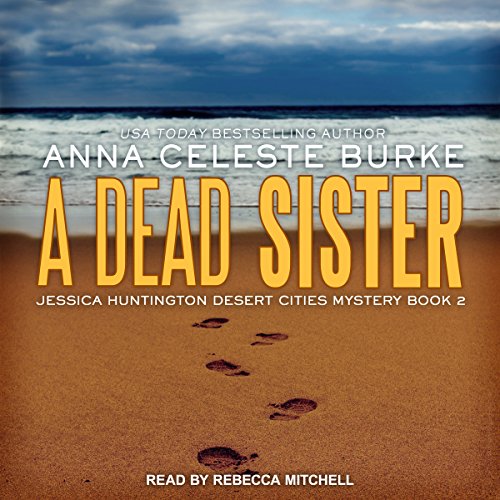 By: Anna Celeste Burke
Narrated by: Rebecca Mitchell
Try for $0.00

Jessica Huntington is back in her second mystery by USA Today best-selling author Anna Celeste Burke.

A cold case heats up when the handsome detective, Frank Fontana, asks for Jessica Huntington's help. Who killed his cousin Kelly? Does Jessica want to know the truth about her high school friend's tragic death?

"The worst kind of truth is better than the best lie, Jessica."

Jessica hopes Bernadette's right as she races headlong into Kelly's troubled past. Believed to be the victim of a hit-and-run accident in Palm Springs, the investigation into Kelly's death had quickly grown cold. Now more than a decade later, a lowlife meth addict claims to have witnessed her death and swears: "It weren't no accident! It was on purpose."

Why would anyone have done such a thing to the 19-year-old, auburn-haired beauty with a voice like an angel and a streak of wild? Join Jessica and her friends as they try to figure out whodunit and why!

What listeners say about A Dead Sister

This is a very well written book with great characters and plot. I look forward to the next one.

The characters are complex with more problem issues than in many cozies. The good guys are likeable and several provide comic relief. The stories are also complex and deal with social issues that affect too many. I highly recommend this series!

The narrator does a wonderful job differentiating many of the characters. The book comes alive in the narration.

I enjoyed the first book but enjoy this book even more and can't wait for the next. I love the characters as the are such a mixed bunch, private detective, lawyer, bodyguard, house keeper, pool cleaner, but despite there mixed professions or life styles they are the best of friends and I like learning more about them.
Jessica best friend was killed in a hit and run when they were still teenagers and when new information comes to light saying that it might not have been the accident that everybody thought it was Jessica and the team get to work investigating. Not sure the new information is that trust worthy they have no choice but to dig deep and ask lots of questions the only problem is someone doesn't want his secrets to come to light and he won't let anyone stand in his way. With painful secrets about her friend being discovered and bodies piling up Jessica has to ask the hard question does she really want to know the truth about her death.
I liked the narrator and think she does a good job of helping the story flow along.

Second book in a series. The main character is interesting and I enjoy following her shopping antics. Sometimes authors make their characters invulnerable, so it is refreshing to see a regular kind of person coping with their own demons while trying to overcome tragedy. Ok, almost regular, I mean she's got money... I'll never own a black amex. :-) The story is good and ends well, so it meets my requirements. Listening to book 3 next.