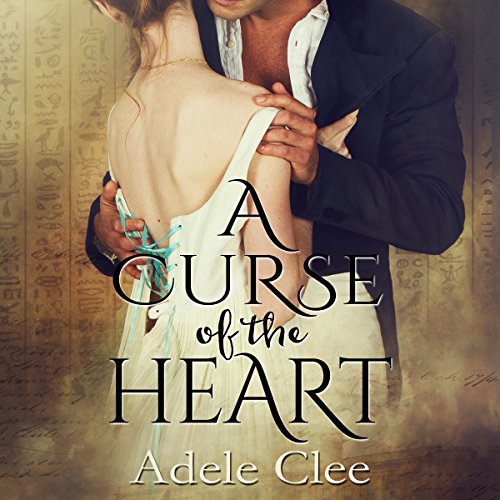 A Curse of the Heart

By: Adele Clee
Narrated by: Kylie Stewart
Try for $0.00

Terrified by strange noises in the night, Rebecca Linwood, the headstrong owner of an Egyptian museum, believes she is suffering from an ancient curse. Out of desperation, she seeks the help of the only man with the knowledge to reverse the evil incantation, a man whose cold heart and sinful gaze pose such an enticing contradiction.

As a scholar of Egyptology and a man consumed by the pain of the past, the enigmatic Gabriel Stone shuns polite society, choosing to bury himself in his books. When a flame-haired temptress pesters him with tales of a curse, his first instinct is to flee. However, his sense of obligation proves to be a dangerous thing and the potent lure of desire too difficult to resist.

What listeners say about A Curse of the Heart

Rebecca Linwood isn't your typical husband seeking wallflower. She's an intelligent woman, headstrong and determined to make her own way in a male dominated world. Her father taught her to love Egyptology and she has spent her life honing that knowledge. Running her own Egyptian museum gives her purpose, although she still feels alone. After reading a mysterious scroll aloud one night, her troubles begin. Mysterious scraping, moaning, and bed rattling at night leave her sleepless. In desperation she seeks out renowned expert Gabriel Stone to break the curse.

Gabriel has heard of Rebecca Linwood's Egyptian museum, but he believes she's a charlatan with only superficial knowledge. Forced to meet her, he accuses her of being a thief and a liar. Stung by his words, Rebecca proves her knowledge and impresses Gabriel despite himself. Recognizing her intelligence, he agrees to help her break the curse. In doing so he becomes involved in her life in ways that only expose how much they need each other.

Both Rebecca and Gabriel were really interesting characters with dark backstories, and I couldn't help cheering them on. Their vulnerabilities made them so likable. They bonded over their common interests, but it was their family complications that really brought them together. They're the kind of couple that you can picture ten years down the road, traveling the world in love like newlyweds on a honeymoon. The plot was really interesting, and it was a good mix of romance and suspense.

I thought the narrator was great, her pace was perfect and her accent worked well with the setting. Her reading was smooth and not dramatically overacted. She pulled me right into the story. I received a copy of the audiobook in exchange for an honest review, and I'll be keeping an eye out for more by this author and narrator!

We were initially introduced to Gabriel and Rebecca in "To Save A Sinner" and their story continues in this novel. They piqued my interest when I first read about them so I'm glad to see they got their own story. In the beginning, I wondered how these two very unlikely characters would end up together. I love Gabriel's personality. And I really felt the journey he had to travel in order to find his HEA.

I like this narrator. Her voice is soft and smooth. This is the first novel I have read narrated by her, but I would definitely like to hear more.

She locks herself away determined to be independent and he grieves his mother’s death and isolates himself in his work.
Common hurts, common loves and they heal together.
Suspense, mystery, love, romance.
Great narration

Another great mystery with another surprise villain whose motives I honestly didn't quite understand. But that didn't keep me from enjoying the book. I loved sweet Gabriel who doesn't believe in love and family and Rebecca who is so stubborn, so independent, and yet at times so naive. Their partnership is what made the story great. And, as always, Kylie Stewart did a great job narrating.

not a bad story but narration wasnt great

narration made it difficult to get through. wont be listening to more with this narrator.

A Curse of the Heart by Adele Clee, is an interesting Regency romance that differs from the norm. A possible Egyptian curse in a new museum in Regency England brings the hero and heroine together. Neither care for the other initially but, eventually, come to care for each other very much. There are enough twists and turns and love scenes to make the book an enjoyable read. The mystery part was done very well- not an obvious ending.

Kylie Stewart narrated A Curse of the Heart. She did a good job, both in her different voices and word inflection.

I received a copy from Audible and, after listening to it, I am voluntarily giving my unbiased opinion and review.

Gabriel and Rebecca come together because of something she thinks was a curse and that it began affecting her life after she read it.
They both have an interest in ancient Egyptian things and history and so find a common ground for their romance to take seed in, flourish and prosper and I couldn't help rooting for their success as a couple.
I so enjoyed this clever adventure and the beautiful romance between two people who lease expected it.
The story is a page-turner and is full of witty scenes, the reconnecting of family members, mysterious happenings in the dead of night, a rather nutty villain, twists and turns in the plot, a rather devine hero and a very sweet and witty young lady who doesn't let too much make her deviate for her goals and a heart warming romance.
Kylie Stewart, was a perfect choice as narrator and she added to my enjoyment of this most enjoyable story which I am very happy to recommend.
I requested and received a free copy of the audiobook from the author and this is my voluntary and unbiased review.

What did you love best about A Curse of the Heart?

I enjoyed the growing relationship between Gabriel and Rebecca. They were two people who were grieving in their own way but together they reached a sense of peace and understanding.

What other book might you compare A Curse of the Heart to and why?

I can't really think of a book to compare it with. This isn't the first book I've read by Adele Clee and I find she usually puts her own twist on the storyline.

This isn't the best narration I've listened to, I always find that if the story is set in Britain then I want to hear a British voice narrating. As for pace, yes that was fine.

Well actually there were several, the moment when Rebecca and Gabriel realised they loved each other. There was another moment connected with the families but I don't want to give too much away.

I had read the book before but it was some time ago but I enjoyed listening to the story again. I've read quite a number of Adele's books and always enjoyed them. There is usually an unexpected twist to the story. I was gifted a this audiobook but have voluntarily reviewed it, This is my honest review.

I thought this was a great audio book with an actual storyline that was both interesting and unique from those with which I typically listen. not the the usual earl duke viscount/heiress wallflower governess poor girl in disguise love story. But still quite the passionate romance between two very likeable characters.
I look forward to seeing more from this author. I have already read her other two books, both were also very enjoyable!

Yes, anyone who enjoys regency mystery romance will surely love this.

What was one of the most memorable moments of A Curse of the Heart?

I loved the opening scenes where Rebecca is demanding to see Gabriel and practically camps outside his doorstep. The banter and snide comments they made to each other was quite entertaining. Their initial dislike of one another was thankfully short lived and not drawn out unnecessarily. I'm looking forward to reading the next book in the series.

Yes and I did! as I spent the entire day clearing out my cluttered study. It was a welcome distraction.

A little dark with a lot of HEA

I love Adele Clee's female protagonists. She writes of an era where women were more subservient, but Adele unapologetically makes her characters more. More different, more tempered by the trials of life despite their young age, more flawed and yet infinitely stronger. That is also true for the male protagonist, who meet the expectations of sweeping in and saving the woman from time to time. But, more importantly, she saves him right back.

Gabriel and Rebecca's interests are quite similar. You would think that they would connect because of their love for Egyptian antiquities but that isn't quite the case. Their connection is much less superficial. They find they can relate to each other because of their inability to move forward from the grips of the past and therefore heal. This story isn't just a historical romance, it is a story of healing.

This books features characters first encountered in To Save A Sinner, but is a stand-alone HEA book.