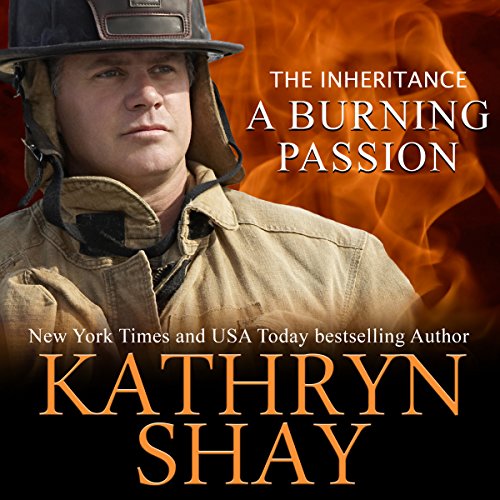 A Burning Passion - The Inheritance

Former friends turned lovers and a billionaire who changes both their lives with an inheritance...what more could two people want?

In the newest installment of the beloved Hidden Cove Series, Dan Collins is everybody's favorite firefighter. He's good at his job, a nice guy, and treats people well. But his life fell apart a year ago when his wife left him for a wealthy man. Thank God Dan has had firefighter Lucy Coretta to lean on, both at work and at home. She's brought him back from the brink of despair and has been there for him during all those horrible months after the divorce.

Unbeknownst to him, Lucy has been in love with him forever but kept it to herself. Then, when he split with his wife, she didn't want to be a rebound girlfriend. One night, though, passion explodes between them, and by the morning, everything has changed. And not just in their relationship. A man comes to the door and hands Dan an inheritance from a wealthy billionaire for saving the lives of his godchildren years ago. It's money - lots and lots of money.

Unfortunately, the windfall doesn't bring him happiness. It messes up all his newly made plans with Lucy and throws them both into a tailspin.

What listeners say about A Burning Passion - The Inheritance

Short enough to listen in one sitting and had a good story line without a complicated plot.

What did you love best about A Burning Passion - The Inheritance?

I love the Hidden Cove stories, very true characters that are fireman, that I hold true to my heart. Dan is divorced and starts dating his friend, Lucy. Dan's wife left him because he was not rich enough to provide for her tastes. Dan comes upon a large inheritance from saving a life. Now all of a sudden, Claire wants back in the picture and throws Dan's new found love in a tail spin.

I listened to this book, and could not stop listening. I will admit, I wanted to strangle Claire a few times. So happy that Dan listened to his heart. I highly recommend this book!

I was given this audio book in exchange for an honest review.
This was a novella and appeared to be a more simple story than some of the Kathryn Shay books I've read. It lacked the development because of the length. The story of fellow fire fighters Dan and Lucy was sweet with some angst thrown in due to the ex-wife. Dan and Lucy had been friends hiding their real feelings for each other. I totally liked that part of the plot. The push and pull of the ex-wife also seemed real life, as well as the kids wanting their family back together.
The inheritance part was a little weird for me. It may have put me off some, because as a fire fighter/paramedics wife for 35 years I don't think I've ever heard of anyone getting more than a handshake or a plate of cookies from a grateful patient. It was a short, fun read.

This was an awesome story. Dan had so much going on. His best friend Lucy was just awesome and his kids great. Narration was great