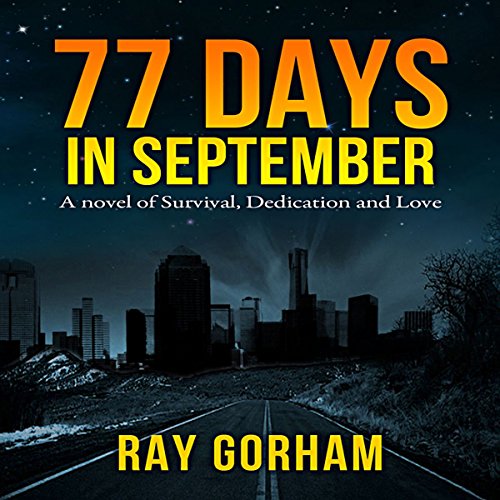 By: Ray Gorham
Narrated by: Joseph Morton
Try for $0.00

On a Friday afternoon before Labor Day, Americans are getting ready for the holiday weekend, completely unaware of a long-planned terrorist plot about to be launched against the country. Kyle Tait is settling in for his flight home to Montana when a single nuclear bomb is detonated 300 miles above the heart of America. The blast, an Electro-Magnetic Pulse (EMP), destroys every electrical device in the country, and results in the crippling of the power grid, the shutting down of modern communications, and bringing to a halt most forms of transportation.

Kyle narrowly escapes when his airplane crashes on take-off, only to find himself stranded 2,000 miles from home in a country that has been forced, from a technological standpoint, back to the 19th century. Confused, hurt, scared, and alone, Kyle must make his way across a hostile continent to a family he's not even sure has survived the effects of the attack. As Kyle forges his way home, his frightened family faces their own struggles for survival in a community trying to halt its slow spiral into chaos and anarchy.

77 Days in September follows Kyle and his wife, Jennifer, as they are stretched past their breaking point, but find in their devotion to each other the strength to persevere.

What is an EMP?

An EMP (Electro-Magnetic Pulse) is a magnetic pulse that overwhelms, and thus destroys, all electronic devices exposed to it. It is the most serious threat faced by a technologically advanced society. An EMP can be human caused, through the detonation of a nuclear bomb high above the atmosphere, or natural, through a severe geo-magnetic storm. In multiple reports prepared for Congress, scientists predict the complete destruction of modern American society and question our ability to ever recover if we are the target of an EMP attack. Further, some predict the death toll in America in the aftermath of such an event to be in excess of 200 million.

About the author: Ray Gorham lives in the small farming community of Shepherd, Montana with his wife and five children. He runs his log-home business by day and writes in the evenings, on weekends, and whenever the weather keeps him inside.

What listeners say about 77 Days in September

Depends on what you want

So if you are looking for your first "end of US as we know it" read... and want a PG-13 rather than an R rated read. I think "One Second After," "Alas Babylon" or "Jakarta Pandemic" trumps "77 Days." If you are looking for incredible writing "The Road" has them all beat. If you enjoyed the above books, this is similar with a non-prepper family being separated during an EMP. It follows both the family at home and the husband as he treks home. They both make dumb mistakes and you aren't going to learn much from their experiences... unless, of course, you don't have a clue what an EMP is... But this book does have some different twists and perspectives. I enjoyed it and it was well worth the credit. However, If you are a prepper looking for something like "Patriots" or enjoyed "Lucifer's Hammer" you probably won't like this at all. And if you want zombies or a supernatural twist like Stephen Kings "The Stand" you will really be disappointed.

What made the experience of listening to 77 Days in September the most enjoyable?

If you're looking for prepper tips with a story behind it, this is not the book you're looking for.
That being said, this book is a great story. Its main focus is the travel of one very dedicated average man trying to get home to his family across the U.S. The writer did a very good job with dialog. He wrote in such a way that listening to what was happening made it easy for your imagination to take hold and visualize the story.

Unlike some novels about apocalyptic disaster, this one seemed more balanced and non-judgmental. It did not make me feel like a lazy fool because I don't have a basement bunker filled with MREs and automatic weapons. It also did not make the argument that every person affected by the disaster suddenly becomes either a pathetic victim (worthy of death), an evil villain or a properly armed and prepared survivalist (worthy of life).

What aspect of Joseph Morton’s performance would you have changed?

I would beg him to PLEASE take at least half a breath between paragraphs. His reading ran paragraphs and chapter endings into one sentence. So you have: Mary looked up at her daughter for the last time the next day was bright and sunny. Very annoying.

It was hard to put it down for the night. It will definitely hold your attention.

The Disney version of an EMP attack

As I write this with the book still fresh in my mind I want to make sure everyone knows I listened to the entire book and it kept my attention, if you are not deep in the prepper genre story world this book may be an entry level fun listen. If you are a prepper this book is going to drive you crazy - the premise is great, and held a lot of promise, the writer has some talent at turning a phrase and penning some decent dialog, but in detailing the struggles of the fellow trying to get home it seems that saying his legs were tired was about as far as the excitement got. This guy gets into some scrapes, and almost does not make it but each time it is because he is stupid. The struggles of the guy are never explored, where he gets food, how does he light a fire and why the hell is he always on the highway even though it is a magnet for trouble? Back home his wife has plenty of trouble in her camp but characters are never developed and the scene of the community is never explored or developed outside of a few glimpses which are the highlight of the story. With all of that said the ending is touching and may be worth the price of admission. I really do not know what to do with this story as far as a recommendation goes, If the story line interests you, take a chance on it, the subject matter is important, and the opening chapters are pretty good and were enough to suck me in. If you are a prepper and read a lot of information on the subject this book will probably seem to entry level to keep you awake.

The narrative starts out very well, with dramatic and interesting perspectives on the EMP disaster, and the people and systems involved. I really enjoyed the first third or half. But when the journey begins, the plot thins out. Events become a little arbitrary and loosely connected. Something similar happens with the other journey narrative, The Road. The Journey is a difficult form to write, because it is inherently loosely structured. Things begin to happen for no connected reason, just because we have journeyed down the road a little further. However, these two narratives give an important view of the post-apocalypse world, in that the protagonists are not together at the moment when the disaster occurs, but in fact are far apart from each other. This is an aspect of the post-apocalypse that needs to be examined, because it is probably far more likely than the tidy plot in which the protagonists are all conveniently together from the beginning.

What made the experience of listening to 77 Days in September the most enjoyable?

I put myself in the position of the main character. It is not too far fetched, and caused me to consider things I would never have thought. How far from home should one wander when there are people who count on us?

Absolutely! A would be 'page turner' if by book. I wore my earbuds till finished!

Simply Terrific -- Wish he had more...

Where does 77 Days in September rank among all the audiobooks you’ve listened to so far?

One of the best.

Even though I'm a fairly masculine guy, this book did make me cry more than once.

Would you try another book from Ray Gorham and/or Joseph Morton?

I would think twice.

It was obvious from the beginning

Have you listened to any of Joseph Morton’s other performances before? How does this one compare?

The performance was good.

Was 77 Days in September worth the listening time?

Yes but I wish the main character was not such a wussy.

Preachy - but an interesting hike

Would you try another book from Ray Gorham and/or Joseph Morton?

Has 77 Days in September turned you off from other books in this genre?

The overall scenario was intriguing - an EMP blast took out U.S. power, communication, and transportation, and a man has to hike from Texas to Montana to get to his wife and kids. But the occasional preaching and political bias made me want to scream at times.

The reader spoiled this book. He needed to pause between changes in people and scenes. His voice was pleasant enough .

As much as i liked the book, The reader was just awful. It made listening very hard work.

Everything. It sounded as though he had never seen the book before. If he run out of breath during a sentence ( which was most of the time ) he would just try to continue. It made the book very ragged.

Could you see 77 Days in September being made into a movie or a TV series? Who would the stars be?

I don't know. I don't go to the cinema or have a TV

I wont buy any more books with this reader

Dont let the love story description put you off.

Nearly didn't buy but really glad I did. It wasn't a soppy love story. It was a well written, well performed apoc fiction book. Thoroughly enjoyed and rooting for Kyle all the way. Love a book that can make me cry in the last 5 mins. Totally invested