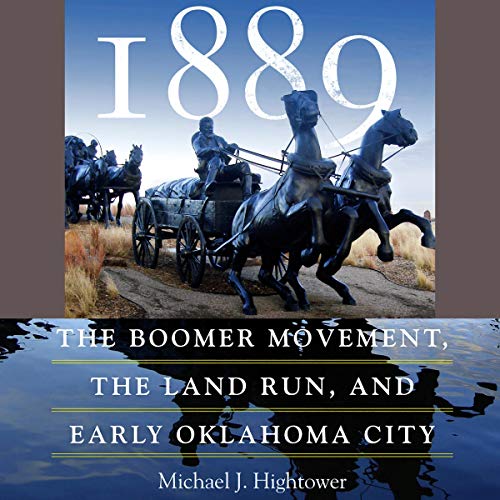 1889: The Boomer Movement, the Land Run, and Early Oklahoma City

After immigrants flooded into central Oklahoma during the land rush of 1889 and the future capital of Oklahoma City sprang up “within a fortnight”, the city’s residents adopted the slogan “born grown” to describe their new home. But the territory’s creation was never so simple or straightforward. The real story, steeped in the politics of the Gilded Age, unfolds in 1889, Michael J. Hightower’s revealing look at a moment in history that, in all its turmoil and complexity, transcends the myth. Hightower frames his story within the larger history of Old Oklahoma, beginning in Indian Territory, where displaced tribes and freedmen, wealthy cattlemen, and prospective homesteaders became embroiled in disputes over public land and federal government policies. Drawing on eyewitness accounts, Hightower captures the drama of the Boomer incursions and the Run of ’89, as well as the nascent urbanization of the townsite that would become Oklahoma City. All of these events played out in a political vacuum until Congress officially created Oklahoma Territory in the Organic Act of May 1890.

The story of central Oklahoma is profoundly American, showing the region to have been a crucible for melding competing national interests and visions of the future. Boomers, businessmen, cattlemen, soldiers, politicians, pundits, and African and Native Americans squared off - sometimes peacefully, often not - in disagreements over public lands that would resonate in western history long after 1889.

“Much-needed contribution...offers the best and most complete coverage of the Boomer movement that I have read.” (Sterling Evans, editor of Farming across Borders)

What listeners say about 1889: The Boomer Movement, the Land Run, and Early Oklahoma City