As Audible's self-development editor, I keep a growing list of motivational quotes from titles such as Sarah Knight's You Do You, and Questlove's Creative Quest, in my metaphorical back pocket. Sure, it comes in handy for writing reviews and newsletters, but it's also something that I naturally look to when life hands me lemons. Lately, there's one quote that is guaranteed to get me through the most frustrating of moments--like scrubbing coffee out of the grout in my kitchen before work (true story). It's three words long, impossible to forget, and it applies to every situation: "I get to."

I met with the creator of this deceptively simple philosophy, former product licensing expert Ted Larkins, as he delved into the story behind his memoir, Get To Be Happy: Stories and Secrets to Loving the Sh*t Out of Life. Read on for his tips on "getting" to do everything from washing the dishes to meeting Bon Jovi.

RX: What inspired you to write Get To Be Happy?

TL: I think through my life I've had a general philosophy of this feeling of Get To. It really came home to me about a year and a half ago when I was doing the dishes. I was grumbling, "Oh I have do the dishes." It hit me. I said to myself, "Oh, I don't have to. I get to." In that moment, I remembered a quote that 20,000 people will die of starvation on the planet today. And I just had this moment of great compassion for that. At the same time as I kept doing the dishes, I thought, I really do get to do these dishes. I had the appreciation that I just had a great meal. A light bulb went off, and I thought, "I get to do this."

RX: I'm glad to hear that at least one person enjoys doing the dishes. Can you speak more to your journey to truly getting to the Get To mindset, and what were some of the struggles you had getting there?

TL: Well, from that moment on, as I started reflecting back, I realized that when I was successful, I was using this form of Get To. I started saying every day, "Oh, I get to. I don't have to."

I used to think, "Oh, I have to sit in traffic and go to work," but when I shifted it over to "I get to", and it really took some work--it became a habit. It's kind of like meditation. It seems so easy. Sit for 15 minutes and don't think about anything. Well, it's not that easy. It takes practice. What I find now as I've gone over and over and I use the Get To and say that over and over, it has become just a part of my life.

RX:  In Get To Be Happy you discuss dealing with the loss of several people who were quite close to you. What is your advice for others who are out there who may be experiencing something similar?

TL: The thing that I really realized is something, a quote, I have kids and the Dr. Seuss quote where he says, "Don't cry because it's over. Smile because it happened." As I started applying that to other situations in my life where I've lost loved ones, it was really powerful. If you were grieving and you've lost somebody recently, I would never say, "Oh, just get over it. You get to do this." No. This is not all Pollyanna by any means. All us human beings know the grieving process. We all go through it. My suggestion, what I say to people is, "Feel what you're feeling. Really feel into that." As you go through the process, I believe you can get to a space, which I have with my mom and daughter, where I say, "Wow, I get to experience that."

RX: Is there anything that you didn't get to say in your book that you'd like to say now?

TL: There is. This is going back to the grieving process, and there's something called the Kubler-Ross Model of Grieving. It was a book by Elizabeth Kubler-Ross that was released in 1969, which was called On Death and Dying. In it, she proposes this five-stages of grieving, which are denial, anger, bargaining, depression, and then acceptance.

One thing that I have realized in my process is that I think she came up short. She missed something. I call it the sixth stage, which is breakthrough. I'll tell you why. In the acceptance stage of this grieving process, it says you learn to live with it. You'll never be okay with it, but you will learn to accept. What I suggest, when you're ready, and I would never say to somebody who's deep in grief, again, just go through and feel, but if you're at a space where, "Yeah, I'm dealing with it. I accept it," my next step is, go to the sixth stage which says, "I not only accept, I honor that soul's journey through life. It was precious and beautiful and I am going to celebrate that life. I'm going to step into joy and I'm going to bring love back to the world because that's what the world needs from me."

It's a big step, but I believe it's real, and the people I share it with are just like, "Oh my God. I could look at my dad's death from 10 years ago from this state of celebration?" I'm like, "Yes. Step into that sixth stage of grieving."

RX: I appreciate you being able to get to that point and to actually share your own experience with others. On a more positive note, you talk a lot about getting to work with celebrities such as Bon Jovi and Mariah Carey. What's one thing that you really appreciated most getting to do in your life?

TL:  One of the biggest joys I had was hanging out with Bon Jovi, with Jon and the band. They were in Tokyo. I had brought him a million-dollar slot machine deal. About a year into the contract and everything, I was introduced to Jon backstage and he was standoffish. He was a jerk. I'm like, "Here I brought you this deal," and he shakes my hand and he's like, "Yeah, whatever."

What I realized was a little while later, after the concert, then we had a meet and greet, and when Jon and the band came in and we were all standing there, the companies that were doing this project together, and they came in, boy, he was a rock star. He was powerful. The women all swooned. I swooned. I'm like, "Oh my God." He might be a jerk, but I'll tell you what, he is a true rock star. But then what happened was, a year later, Jon and the band, they came back to Japan. The machines were finished and I got together with the band. Somebody said, "Oh Jon, it's Ted, who did this deal." He got the biggest smile on his face. "Ted. Hey buddy. How are you?"

The women all swooned. I swooned. I'm like, "Oh my God." He might be a jerk, but I'll tell you what, he is a true rock star.

I was like, "Who am I to judge?" We went to dinner, we sat, we talked. He had challenges just like you and me. He had teenage kids, and he was speaking about the challenges of that. I shared some of my stuff. What I realized in meeting other famous people, was the same thing. At first, they're a bit standoffish, and I think they have to because everybody's after them. Once trust is built, then they become just regular people like you and me just trying to find happiness. I found Jon just to be an incredible guy. The same thing with some of the other artists I met. In the end, they're just like us. They get to be happy. That's what they want.

RX: Thank you. That was a fantastic story. Now I feel like I know Bon Jovi on another, deeper level. What do you say to someone who maybe doesn't get it right away or somebody who shows a lot of opposition to this idea of I get to do this?

TL: First I smile. I say, "Well, you get to have opposition. Good for you! Feel that!"

I have a mantra and it goes like this: You say I get to. Your mind gets quiet. The next thing you do is you smile. When you smile, positive endorphins are released in your body and you feel joy. It's a physiological thing that happens in the body. You actually step into your power. You're no longer a victim to life. You're engaged. You're in control. Get to, smile, do it.

When people oppose it and they say, "Well, you can't do that," I say, "Just give it a try." Next time you're doing something, cleaning the cat box, just say, "Hey, I get to," smile, and do it.

RX: I'll try to remember that the next time I'm tasked with that chore in my own home.

RX: What was the process of self-publishing with ACX (Audiobook Creation Exchange) like?

TL: I had a great time. I explored going down the publishing route, putting together a proposal and going to the publishers and all that, but what I found is the tools are so available for us now, on Amazon CreateSpace, Lightning Source, Ingram Spark, there are so many different platforms which you can put together a book and get it edited. I found an editor and a cover designer. I kind of just put it all together and it was fun. I really enjoyed it. Then the process with Audible was fantastic. You guys make it so easy. I just get on the site and click, click, click, and you introduce me. There was a site of engineers, people that would help me with the recording and I found one. He was the nicest guy in the world and I went in his studio. It was seamless. What a joy. I just recommend everybody. Get out and write your book and record it.

RX: That's really great advice. What's the best thing that you have gotten to do since publishing Get To Be Happy?

TL: Well, I've got to come in here and speak with you, Rachael! That's huge. What an honor to be here at the Audible studios in downtown Newark. It's just really fantastic. I was on Fox News, I got to do an interview on Fox News. It was really fantastic. I've been at several book signings now, which are really, I was at Barnes & Noble out in Huntington Beach in Los Angeles and did a book signing. Having people come and really acknowledge that I've written a book and I get to sign it and give it to people, it was really, really great.

RX: Thank you. Well, it's an honor to be speaking with you today, too.

Get to Be Happy: Stories and Secrets to Loving the Sh*t Out Of Life 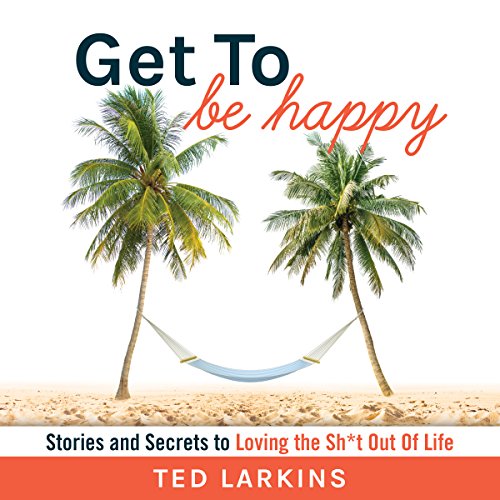