Literature & Fiction | Mystery, Thriller & Suspense | Teen
"Ted Dekker is a true master of thrillers." - Nelson DeMille, NY Times bestselling author "BoneMan's Daughters is a tour-de-force of suspense that demands to be read in one sitting." -James Rollins, NY Times bestselling author "Ted Dekker is a master of suspense." -Library Journal "Priest's Graveyard is a thrill-a-minute ride, with heart-pounding action and a twist that you'll never see coming." - Tess Gerritsen, NY Times bestselling author of Ice Cold "Priest's Graveyard is an amazing novel, utterly compelling, intensely readable, well written, and completely original. -Douglas Preston, co-creator of the famed Pendergast series "Here's the best part about The Priest's Graveyard: It's smart enough to realize that, for many, the scariest thing in life isn't a monster or something that bumps in the night. It's love. Love is terrifying. And powerful. And unstoppable. And if you don't already know that, you're about to see why. Priest's Graveyard will haunt you--long after you want it to. - Brad Meltzer, #1 NY Times best selling author of The Book of Fate and The Inner Circle "If you've never visited Ted Dekker's world, do it. The Priest's Graveyard is perfect entertainment. Beguiling, compelling, challenging, and riveting --fantastic gimmick-free storytelling -- that's what you get with Ted Dekker. Don't pass this one up." - Steve Berry, New York Times bestselling author TED DEKKER is a New York Times bestselling thriller author. Heralded as a "master of suspense" by Library Journal, Dekker has sold millions worldwide, establishing himself as one of the most widely recognized author brands. He began his career writing fantasy novels that explored spirituality (Black, Red and White) and has since become a major force in the mainstream fiction arena with his recent thrillers, "Adam," "Thr3e," "Skin," "Obsessed," "BoneMan's Daughters," which landed in the #10 on the New York Times hardcover bestseller list in 2009, and "The Bride Collector". Dekker has been honored with a Christy Award as well as a Gold Medallion Award for Best Fiction. "Thr3e" and his novel "House" became feature films. Dekker was born to missionaries and grew up among cannibals of Indonesia, and his peculiar upbringing gives him a unique perspective outside the cultural bubble, allowing him the freedom to share provocative insights in his fiction. After leaving Indonesia, Dekker graduated from a multi-cultural high school and took up permanent residence in the United States, earning his B.A. in philosophy and religion, and then went into business. In the early nineties, Dekker decided to pursue his desire to write fiction, selling his company, moving his family to the mountains of western Colorado, and writing full-time. Two years and three books later his first novel, a supernatural thriller called Heaven's Wager, was published. Dekker proceeded to write 6 more supernatural thrillers, rising to the top of many bestsellers lists and earning himself critical acclaim and legions of fans. "Thr3e" heralded his launch into mainstream fiction and was followed by "Obsessed," "Skin," "Adam," and "BoneMan's Daughters," all of which hit the New York Times bestseller list. Ted Dekker's fans are comprised of readers of all ages, backgrounds, and belief systems who love his compulsively readable stories, authentic characters, and universal and relatable themes that he explores from a unique point of view. He resides in Austin, Texas with his wife and children. You can find him at Teddekker.com and Facebook.com/teddekker.
Read more Read less

See all titles by Ted Dekker

A Quote by Ted Dekker


Ted Dekker
The Slumber of Christianity 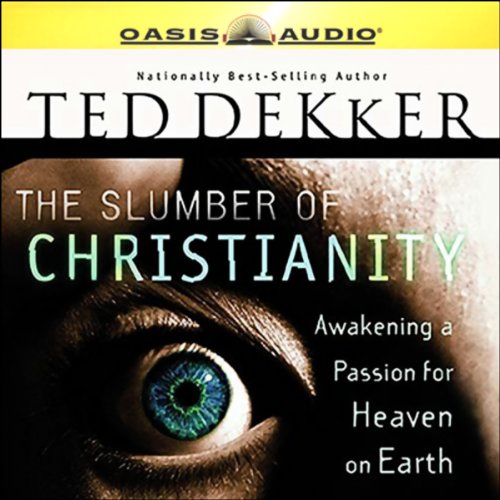