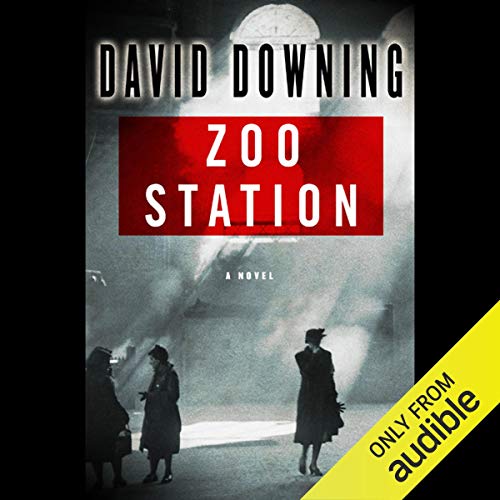 By: David Downing
Narrated by: Simon Prebble
Try for $0.00

By 1939, Anglo-American journalist John Russell has spent 15 years in Berlin, where his German-born son lives. He writes human-interest pieces for British and American papers, avoiding the investigative journalism that could get him deported. But as war approaches, he faces the prospect of having to leave his son and his longtime girlfriend.

Then, an acquaintance from his communist days approaches him to do some work for the Soviets. Russell is reluctant but ultimately unable to resist. He becomes involved in other dangerous activities, helping a Jewish family and an idealistic American reporter. When the British and the Nazis notice his involvement with the Soviets, Russell is dragged into the world of warring intelligence services.

What listeners say about Zoo Station

I am an avid reader of the Bernie Gunther saga ( by Philip Kerr) which takes mostly place in the pre-war Nazi Germany. Same atmosphere , same background as in Zoo Station, but all this is depicted with a brilliance that David Downing sadly lacks. While Philip Kerr can leverage on this extremely dramatic environment to add intensity and force to the story plot, Downing writes a mousy story set out in a depressing background.
Looking forward the next Bernie's book.....

David Downing has written four books set in Nazi Germany, featuring jounalist John Russell. this is the first in the series. All are very well written, and capture brilliantly the paranoia of what life must have been like, and the constant compromises one had to make to survive. Although low key, the book is superbly plotted with interlocking stories and builds up to a tense finale.

A very very good book that portrays the horrors of pre war Germany and Hitlers persecution of the Jews, while the rest of Germany carries on as normal.
First book by this author I have listened too and look forward to his other books.
Up to now going of the star ratings of all books I have read I have enjoyed all the books and been introduced to many different authors

Berlin before the outbreak of World War 2

This is a very interesting and very well written book that has completely captured my interest. The central character is a veteran English journalist John Russell, living and working in Berlin as part of the press corps in 1939 - he was previously married to a German and has a son Paul, who is to all intents a young German. The storyline vividly brings to life the poisonous atmosphere in Berlin the year tat war breaks out - with the persecution of the Jews and other sections of society, and the helplessness of these people in the face of oppression under Nazism. The story really brings to life the grim streets and the reality of what it must have been like in these times.

I find myself going on long walks with the dog to hear what is happening next with this enthralling story, as he is drawn into a complex web working for the Russians, the Germans and the British

Zoo Station is the first in the John Russell Series. Russell is a British Journalist based in Germany, who travels widely in continental Europe.


The Story starts in Dansik on new years eve 1938, where he whitness the departure of a kinder Transport, where he intervenes to help a British Red Cross nurse has somehow upset a brown-shirt.  He is also approached by the Soviets who would like him to write a couple of articles.  Later in the book he helps a jewish family to escape the Reich following the death of their father.


I enjoyed this book, I have both the audio and print versions.  Some reviewers have suggested that Zoo Station is lite on historical accuracy, lacks depth and is predictable.  Possibly, these Critisims are fair but I would suggest that people look for different things in books.  If you want a read which is not over taxing then this is a book and indeed a series for you.


Simon Prebble does a fine job of narration

Not bad, the atmosphere is well-captured and it's fairly written, but the story itself seemed somewhat unidimensional. Simon Prebble was a joy to listen to though, as always.

One thing to note if audible or the producer is monitoring these reviews, there's a strange reintroduction with title and author part way through the book (I believe it was at about the five hour remaining mark). For a moment it was confusing as I wondered if something had gone wrong and I was missing the rest of the book.

I took a punt on this book, having no previous knowledge of it. It was really excellent. A good story well told. I am off to buy the next one!

Story reasonable but not more than that. Narration was like having a story read not acted. Phillip Kerr much better

I loved this story, subtle and still chilling with its details of Germany on the eve of war. Superb narration and production too. Highly recommended.

It never really got going.

The premise of the book interested me but it plodded. Perhaps the narrator’s laidback style wasn’t right for this story or perhaps he was bored reading it? Perhaps I just prefer books with pace and more in depth characters. This novel tried hard, and did have moments when I thought it would take off, but overall just didn’t hit the mark for me. However, I did listen to the end as I knew if I started to read another book I wouldn’t go back to this one and I was interested enough to want to know what happened at the end so something about the plot must have been right!

Found it an interesting companion read to "Fatherland" by Robert Harris and "The Reader" by Bernhard Schlink - both set in post-war Germany.

A good listen in its own right.