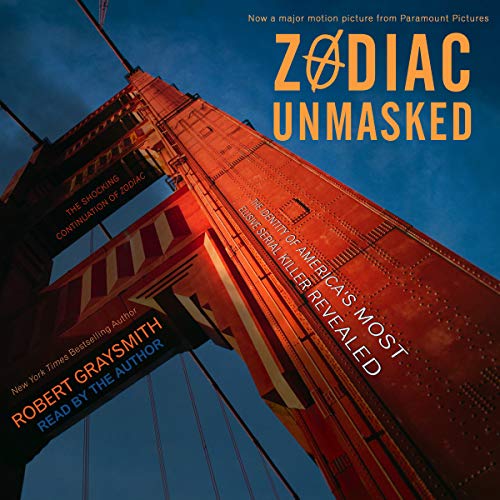 Between December 1968 and October 1969, a hooded serial killer called Zodiac terrorized San Francisco. Claiming responsibility for 37 murders, he manipulated the media with warnings, dares, and bizarre cryptograms that baffled FBI code-breakers. Then, as suddenly as the murders began, Zodiac disappeared into the Bay Area fog.

After painstaking investigation and more than 30 years of research, Robert Graysmith finally exposes Zodiac's true identity. With overwhelming evidence, he reveals the twisted private life that led to the crimes and provides startling theories as to why they stopped.

"A scary and disturbing account of pure evil." (Booklist)

What listeners say about Zodiac Unmasked

This is a very engaging account of the Zodiac, detailing killings ascribed to him, some that were claimed by Zodiac falsely, and the numerous copycats that followed. The parallel presentation of timelines was quite useful, jumping between the crimes and police investigations and the activities of the prime suspect. I watched the film created from the original book directly after finishing, and it flowed much more understandably than the first time I'd watched it. There's even an epilogue in the book giving a brief behind the scenes on the set of the film. And don't let the 17hr, 47min runtime scare you off. I found a 1.5x speed was a quite comfortable pace.

listened start to finish a 17hr marathon very well put together. found that writing names down to keep the large cast straight was helpful.

This is a thorough, well researched explanation of the Zodiac killings and major suspect with details of investigations by multiple competing law enforcement groups (and documentation of how those uncoordinated efforts likely contributed to the crimes remaining officially unsolved). Narration is generally good but occasionally a little hard to follow, as when the author (who does his own narration) does not adequately pause or indicate when he reads "I did ..." and leaves the listener confused whether he is quoting a subject he has been writing about or actually referring to himself. Likewise he sometimes falls into odd inflection, as it he thought the sentence was complete but finds there are a few more words or another phrase he forgot about, this is a little unsettling to the listener, more than once I went back to repeat a section to catch the actual meaning. But he is a good writer and if you like audio books for trips or other activities this is a long one, really gives you a lot for your money. And for the true crime buff, this is a great one, you will like it!

Robert Graysmith's second book on the famous Zodiac Killer case is incredibly incoherent and stunted. While the author does a serviceable job of narrating his own work the material is hard to make sense of at times. The information about the case hasn't been arranged according to any timeline and there's barely an attempt at trying to weave it into a story. My biggest complaint is that most of this book is recycled from his first book. And again it is wrought with factual inaccuracies about the case and baseless accusations presented as fact. Graysmith doubles down on Arthur Leigh Allen as the prime suspect by giving us heaps of circumstantial evidence, a great deal of which is hearsay, completely untrue, distorted or of little to no significance to the case. While his first book was flawed it did at least serve as a decent introduction for someone new to this case so long as they would be able to discard some of Graysmith's irrational theories and ridiculous "solution" to a Zodiac cipher. The first book also had a much better narrator (Stefan Rudnicki), I was disappointed to see that he was not featured here. But then again this material is so dense and esoteric it would make sense that the author himself might be the only one to give it a proper recitation.

weak ending with a long as for the movie

long long book. very repeditive listened over a couple of weeks when I was doing something else.