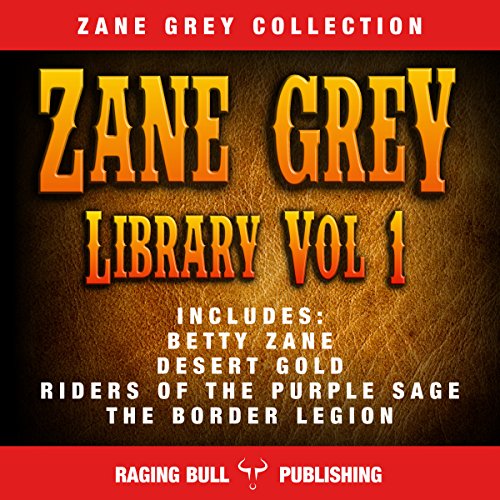 Inspired by the life and adventures of his own great-great-grandmother, Betty Zane was Zane Grey's first novel, and it launched his career as a master writer of rousing frontier and Western adventures.

Betty Zane is the story of the events culminating in the last battle of the American Revolution, when 200 Redcoats from British-controlled Detroit along with 400 Shawnee Indians attacked the small, wood-palisaded Fort Henry on the Western frontier. The heroine of the battle - a young, spunky, and beautiful frontier girl - was Betty Zane.

The story describes the recent uprising along the border and ends with the finding of the gold that two prospectors had willed to the girl who is the story's heroine.

Riders of the Purple Sage tells the story of Jane Withersteen and her battle to overcome her persecution by members of her church. Throughout most of the novel, she struggles with her "blindness" in seeing the evil nature of her church and its leaders, trying to keep both Venters and Lassiter from killing her adversaries, who are slowly ruining her.

Jack Kells was a remorseless killer, head of a gang that ravaged the Southern border. He didn't think twice before he kidnapped pretty Joan Randle on a lonesome Idaho trail. His cold eyes filled her with fear, but her goodness made something happen deep within him. Bad as he was, he knew he had to keep Joan safe from desperadoes far worse than he.

Kells had a price on his head and on his heels. Now, loving this woman could cost him his life...or it could make him a hero in this wild, dangerous land.

Visit ragingbullpublishing.com - The home of Westerns.

Shame on Audible for Hiring this Narrator!

So how bad is William Mark Woelfle? I have smoke coming out my ears. This un-be-lie-va-bly bad narrator says "tacky-turn" for taciturn. Custer of the famous last stand becomes -- no, really! -- custard! The little word "a" which most of us pronounce "uh" is with Mr. Woelfle always a long a, i.e., "ay." The result sounds like a young child reading word by word. Did anyone ask how far this deep voice got in school? He quite ruined "colloquy." When he read that a character had been "mizzled" (misled), I had to write this review and stop listening. Volunteer readers do better over on Librivox!

Worst, utterly worst narrator EVER. Skip this and try Zane Grey with someone else. You will glad that you did.

The narrator Stinks! I wished I could turn this book back in. It is absolutely terrible.

the stories are amazing. After getting used to the clinical narration, the listen was not so bad. I wonder how the narrator understand the way people talk. His narration can dramatically the meaning of the sentence. It requires constant a adjustment to get the true meaning of the written sentence. I love the stories.

Story was good. Not great but just good. William Mark Worfle was THE worst narrator I have ever heard and that made it very hard to finish thes four stories.

Man and his his quest for money, power, and love

a collection of very violent stories but seemingly authentic and captivating right till the end.