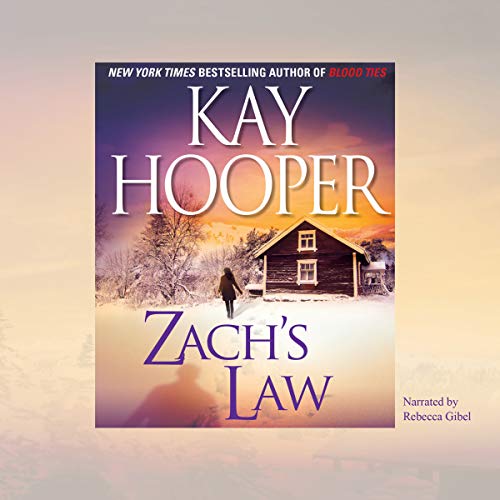 By: Kay Hooper
Narrated by: Rebecca Gibel
Try for $0.00

In this beloved romance by master storyteller Kay Hooper, a woman who experiences car trouble in the Rocky mountains gets more than she bargained for when she stumbles upon an investigator's stakeout operation. Teddy Tyler is taken captive by handsome, rugged Zach Steele - and is not to be released until his investigation into a gang of gunrunners is complete. But Teddy quickly discovers that she doesn't much mind being detained by Zach.... She's powerfully attracted to him, and she won't rest until he gives in to his own attraction.

What listeners say about Zach's Law

THE LOVE OF ZACH

YES, IT SHOWS HOW HARD IT IS FOR A MAN TO LOVE AFTER HE HAS BEEN BURNED IN LOVE

THE WAY THEY MEET WHICH WAS DIFFERENT. I LOVED IT

WHEN THEY SAVED HER BY GETTING HER OUT OF THE HOUSE

YES, WHEN SHE WENT TO HIM TO SAVE THEIR LOVE AND HE WAS READY TO SHOW HER LOVE

I enjoyed this book!

I read this series when Kay Hooper first wrote it and enjoyed all the books in the series. I've also enjoyed listening to the series as it is released. I can't wait until the rest are released as audio books. Zack's Law has a very simple plot; sometimes, that's good. it's a very quick listen and the reader is ok. This book carries the series forward and fills in the lifes of the other characters which is another point in it's favor. It was worth a credit.

zach's law I want my money back

Do not waste your money... I can not believe Kay Hooper really wrote this book?? must of been her first.. I can not finish this slop.

This was one of those awful stories where the immature heroine falls madly (and creepily) in love with the brooding stranger after spending only a few hours with him. The "damaged" hero, of coarse, wants her too but has sworn off virgins. Hour after miserable hour of this boring story described detailed his-and-her self-pondering. There were a few abstract notations of criminal activity going on but were only a vague part of this book--actually, there was very little activity of any kind.
Sadly, the narrator was as unenjoyable as the story.