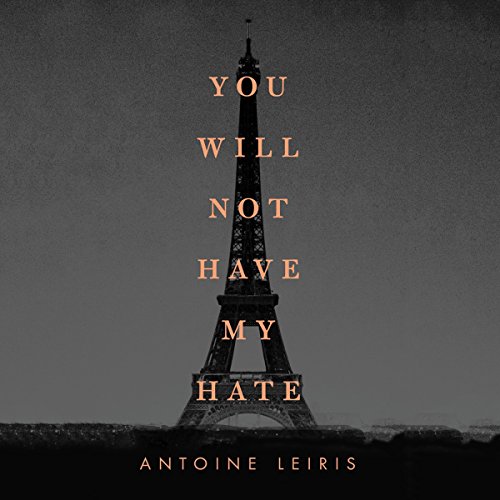 You Will Not Have My Hate

You Will Not Have My Hate

"On Friday night you stole the life of an exceptional person, the love of my life, the mother of my son, but you will not have my hate."

On November 13, 2015, Antoine Leiris' wife, Hélène Muyal-Leiris, was killed by terrorists while attending a rock concert at the Bataclan Theater in Paris, in the deadliest attack on France since World War II. Three days later Leiris wrote an open letter addressed directly to his wife's killers, which he posted on Facebook. He refused to be cowed or to let his 17-month-old son's life be defined by Hélène's murder. He refused to let the killers have their way: "For as long as he lives, this little boy will insult you with his happiness and freedom." Instantly that short Facebook post caught fire and was reported on by newspapers and television stations all over the world. In his determination to honor the memory of his wife, he became an international hero to everyone searching desperately for a way to deal with the horror of the Paris attacks and the grim shadow cast today by the threat of terrorism.

Now Leiris tells the full story of his grief and struggle. You Will Not Have My Hate is a remarkable, heartbreaking, and indeed beautiful memoir of how he and his baby son, Melvil, endured in the days and weeks after Hélène's murder. With absolute emotional courage and openness, he somehow finds a way to answer that impossible question: How can I go on? He visits Hélène's body at the morgue, has to tell Melvil that Mommy will not be coming home, and buries the woman he had planned to spend the rest of his life with.

Leiris' grief is terrible, but his love for his family is indomitable. This is the rare and unforgettable testimony of a survivor and a universal message of hope and resilience. Leiris confronts an incomprehensible pain with a humbling generosity and grandeur of spirit. He is a guiding star for us all in these perilous times. His message - hate will be vanquished by love - is eternal.

Didn’t know what to expect

This is a new experience for many of us - random attacks that take lives of the individuals that are the most innocent. So I am glad to have listened but wasn’t satisfied with the title and the story. Sorry. I believe I was hoping to get more insight to how to deal with these acts of terrorism, not to waste time, energy and emotion on these attacks. I feel that Mr. Leiris has a lot of surpressed anger

Would you consider the audio edition of You Will Not Have My Hate to be better than the print version?

Absolutely, these words should be read to you.

What was one of the most memorable moments of You Will Not Have My Hate?

This section: "Aggravating circumstances are for trials as a way of quantifying loss. But people don't count their tears. and they certainly don't dry them on the sleeves of their anger. Those with no one to blame are alone with their grief. I am one of them. Alone with my son who will soon ask what happened. What would I be telling him if I placed the responsibility for the circumstances on our life at someone else's feet.... "Of course having a culprit, someone to take the brunt of your anger is an open door, a chance to temporarily escape your suffering. And the more oedipus the crime, the more ideal the culprit, the more legitimate your hatred. You think about him in order not to think about yourself. You hate him in order not to hate what is left of your life. you rejoice at his death in order not to smile at those who remain."

Which character – as performed by Gildart Jackson – was your favorite?

This is the most beautiful book I have ever read.

this little story is touching strong and powerful. I brings you into the authors provate world and then leaves you wanting more

Antoine Leiris as narrated by Gilfeather Jackson is a memoir of his journey through life after the death of his beloved wife in the Paris terrorist attacks of November 13, 2015.

What made the experience of listening to You Will Not Have My Hate the most enjoyable?

He was so eloquent and since I have suffered the loss of both my parents, I could feel his pain and I could identify with all of his raw emotions. Narrated so beautifully. I felt likehe was a part of the story, not just readng the words.

What was one of the most memorable moments of You Will Not Have My Hate?

I loved that he didn't dwell on the terrorists. He spoke of his love, his wife, the mother of his child and how he handled the people around him who tried to bring him solace in his deep loss.

What does Gildart Jackson bring to the story that you wouldn’t experience if you just read the book?

Mr Jackson is phenomenal! I Love his voice and the soft tones. He made the story a great experience.

I felt sd, but at the same time, I feel that the author will be alright.