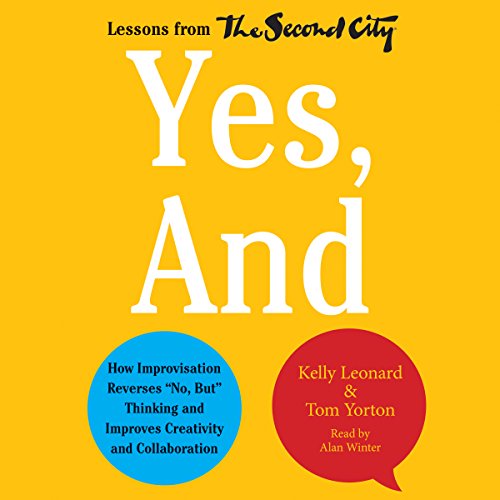 By: Kelly Leonard,Tom Yorton
Narrated by: Alan Winter
Try for $0.00

The Second City has launched the careers of celebrated comic performers such as Tina Fey and Stephen Colbert and produced award-winning content. But it's the actual improvisational process developed and honed over the years by The Second City that has become its legacy. Players master an ability to cocreate in ensembles using philosophies that celebrate a "yes, and" approach. They embrace authenticity and failure and espouse the idea of "following the follower", which allows any member of the team to assume a leadership role.

For more than two decades, The Second City has taken these same principles to thousands of corporate clients, showing leaders how to apply the tools of improv to common business challenges. Here, for the first time, Second City executives Kelly Leonard and Tom Yorton describe how you can use the same skills that thrill audiences around the world to improve your emotional intelligence, increase creativity, and learn to pivot out of tight and uncomfortable situations. In this engaging, often humorous, and highly practical audiobook, you will learn how to become a more compelling leader and a more collaborative follower by employing the seven elements of improv:

"Narrating a most engaging lesson on being productive and influencing others at work, Alan Winter communicates a natural enthusiasm that makes you like him right away and trust his understanding of the authors' message. His vocal personality, pacing, and articulation draw listeners in and make them want to stay connected." (AudioFile)

What listeners say about Yes, And

The title is the best part

Would you try another book from Kelly Leonard and Tom Yorton and/or Alan Winter?

No. It never seems to get to any points advertised. Very disorganized presentation.

Disappointment. I wanted something useful. I'm not going to hire Second City to come to my meeting and make a point using sketch comedy.

I thought the book would would focus on "showing leaders how to apply the tools of improv to common business challenges", as described. Instead, this was a rambling pile of name-dropping. The book meanders through business-type situations (without getting to the meat of what was done) and quickly returns to theatre performances - even describing the number of people in the audience, and whether they were grumpy.

This is More about marketing second city works - so - I do not recommend this book.

This book was one of the biggest disappointments I've had in an Audible book this year. It could have been partly that my expectations were too high.

As others have said, the title is as much as you will learn about improvisation. There is very little about the practical application of the "yes, and" philosophy.

This book is basically a really long brochure for Second City.

If any writers want to satisfy some readers, they could write a book describing how to use the "yes, and" philosophy for improvement on and off the stage.

The Title is all you learn from the book

I bought this book to learn about improvisation. All I got from it was that Second City has a department that works with businesses to teach improvisation skills. This book is basically an infomercial so that more businesses will hire them.

This book does so many different situations in which improvisation works to help the situation, but doesn't explain how to improve improvisation skills.

I have never been more disappointed in an audible purchase.

To add insult to injury the narrator kept breathing in the middle of the sentences because he couldn't finish the thought of the page. That was super annoying.

Required reading for creation in teams.

This is a simple concept, driven home in an intelligent and entertaining way. I work in a creative business and the &quot;Yes, And&quot; philosophy is critical to doing good work. I have injected it into our process.

Concepts that are life changing

Written for a business audience, yet teaches new ways of thinking that may change you forever. Truly listening as a means of comedic survival on the stage, listening to all ideas, all ideas of equal value, supporting all in the group, uplifting the talents and skills while supporting the whole person are enormous life changing skills & business skills

Opened my mind to how corporate America can gain from this. Worth the read or in this case THE LISTEN!

I knew the book was going to give practical advice for bringing improv methods into business but I was hoping for more laughs too.

This was a very long infomercial with detailed description of all the good programs you can buy from Second City Works and didn't provide real advice on leading improv exercises without their help. I am a huge fan of Second City and many of the wonderful alumni. I don't feel any more informed about its inner workings but was occasionally entertained. The best I can say is that performance of surprisingly dry material was good.

I wish I found this 5 years ago. great business I sights for sandler trainers

The name of the 2nd city organisation comes every 3 sentences. We we we. Too long, too boring, you still don't get the point after hours of listening.