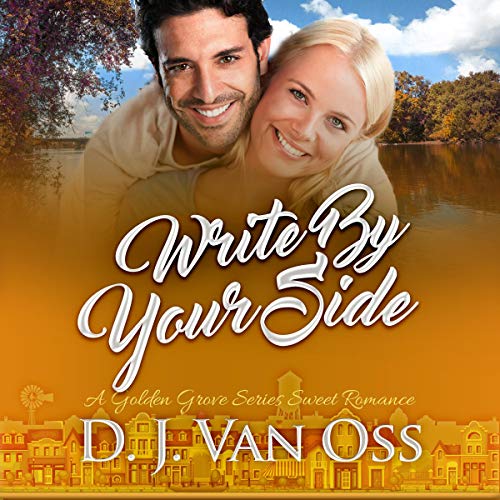 Write By Your Side (A Small Town Sweet Romance)

Ellie Chambers always wanted to be a writer.

Now, she was a successful author, but it had come at a price. Two prices, actually.

The first was the fallout from a hastily-signed contract with Margo Rollings, the publisher who wouldn't die. And the second was Sam Price, her former writing partner and almost-fiance.

Sam Price had dreamed of being the next Hemingway, not the hack ghostwriter behind the popular "Lottie Long" cozy mystery series. But days spent with his dad as a sought-after finish carpenter in quaint Golden Grove, Iowa gave him little time for much else.

Now, an unforeseen catastrophe in the form of Margo Rollings, his former publisher, has left him with the ultimate lose-lose proposition: Write another book with Ellie or face a ruined career. The result leads them into the deadly world of laser-guided rosary peas and spam cupcakes.

Can Ellie and Sam put aside their differences in order to save their careers? Or is there a happily-ever-after waiting for them at the end?

6 yrs ago the writing duo of Price-Chambers ended when the skeezey publisher closed down...as did their romantic relationship. Now Ellie Chambers is a well-known author of a detective series, while Sam Price remains a ghost writer for a who-dun-it series. When their mutual agent calls them in for a meeting, they learn that the prior publisher has decided to re-open her publishing business and that the writing duo still owes her a book...or pay her $100,000 for breach of contract. Can these two former soulmates work together to accomplish this task or will egos and manipulation get in the way? Or is this the second chance that they need to rekindle their romance? While this is a good book, there were a few parts where it tended to drag...but I stuck with it and there is a cute HEA. Narration helped to keep me going.
I accepted a complimentary copy in exchange for an unbiased review.

Write by your side is a cute 2nd chance romance. I loved the story and the angst that Ellie and Sam went through and their shared history. It would have been a bit more enjoyable if the narrator stopped a little more in between thoughts/dialogs to give more emotion since it sounded rushed, however she did a fantastic job with emotion and switching between character voices.

I absolutely loved listening to this book, D.J. Van Oss and Kathleen Li did an amazing job bringing the characters to life. I can't wait for more from this author

I love romances where it’s a second chance at the characters finding their HEA reading or listening to the journey is always a treat for me and this books was no different. Definitely recommend this book if you want to see if he journey to HEA it’s worth it.

Sam and Ellie were College sweethearts with big plans for their future. They both had dreams to become famous authors. Ellie met the unscrupulous Margo. She promises publishing their book. Ellie didnt read the fine print! which caused a major rift between both her and Sam.
4 years later Margo contacts their agent ,Max, to collect on the final installment of the contract. Another book written by both.
How can they work together again? sparks fly, disagreements. How can they get thru this? this is a funny, cute, romantic story of seconds chances. Kathleen Li narration is great! I received this audiobook free in exchange for an honest review. I thoroughly enjoyed this story!

This is a sweet second chance romance! The original storylines are interesting and they held my attention from start to end. The characters are likable and well developed. Sam and Ellie had dreams of becoming successful authors, they were a couple and wrote several books together. They had a contract to write 4 books with a conniving publisher, Margo Rollings but the company folded after their third book. Sadly, their relationship did not survive their differences in opinions and the pressure of success. Ellie continued writing and had several books published, Sam became a ghost writer for a well known author, never finishing his own novel. Four years later Margo Rollings contacts them telling them they owe her one book, if they do not fulfill their contract it could ruin their reputation and they would have to pay Margo $100G. So they team back up to write the novel their contract requires. I liked how it all played out, the two worked well together, got over their animosity of breaking up. They realized their issues with each other, their differences and what made them love each other in the first place. They came up with a great idea for a book, it was hysterical but their plan did not go as expected. I recommend this book for a fun and entertaining reading and/or listen, there is plenty of drama, humor, a tad of angst and sweet romance. D.J. Van Oss, thank you for this great story.

I listened to the Audible edition, Kathleen Li is a wonderful narrator and voice performer. She brought these characters to life, gave each their own voice and personality. She did a great job projecting the emotions of the characters and the drama of the story into her performance. She is an entertaining storyteller and a pleasure to listen to. Thank you for this great listen

This was a nice book. Narration was enjoyable. I enjoyed the subject and will probably do a repeat listen.

Sometimes you just want something sweet with little intrigue, light conflict, and this book fits the bill. I enjoyed listening to the narrator, the book was pleasant this was well worth my time and matched my mood perfectly.

What a great and heartfelt story. Loads of ups and downs with lots of humor. The narrator does a great job.

I love second chance romansces, and this was OK for me. I liked the story line, it had a lot of promise. What it didn’t ha e was the romance part. Not really anyway. It was entertaining to listen to, lots of drama. The end seemed quite rushed. It goes from no romance at to engaged.

Entertaining and enjoyable with good narration

I enjoyed listening to Kathleen Li narrate this story.

The way the characters are to each other at the start of this book really made me chuckle. You could sense the way they felt coming right out at you. The story kept me entertained all the way through and I enjoyed watching as their relationship grew and changed.

This was a new Author to me. I enjoyed the storyline and the characters. Especially Sam. Ellie, felt was lacking, but a stong one. Honestly she annoyed me in the story.
it was great to hear bits about my former home state in the book.

the narrator was also new. I will say it was hard to listen but I persevered. I wanted to hear how the story went.
she seemed to read fast, hardly to look a breathe. at times it was hard to know which character she was reading.
despite these little quirks the story want bad and that's why I couldnt give 5 stars

Sam and Ellie were in love once, but their drive to succeed as writers drove them apart. They get roped into writing one more book together. Can they come together, after too many years of not speaking, to fulfill a contractual obligation to complete one more book?

The story, written by DJ Van Oss, does a great job describing the ups and downs they go through to write the book, which isn’t what the publisher expects!! There are ups and downs, and even though they remember what they had, their egos continue to get in the way!!!

This was a good listen and the story was what I expected... fun and second chance romance.

Kathleen Li is a new narrator for me.

This was a very cute and humorous, romantic, comedy love story. I believe the author D. J. Van Oss captured not only the the humor in that he was looking for, but to illustrate that love can find itself second time around.

I love the interaction between the two main characters with their best friends and the blooming relationship between those two friends.

The narrator Kathleen Li had done an terrific job with the vocals. This was my 1st time hearing her voice, but look forward to hearing her again.

I recommend this delightful contemporary romance to others; for sure!

Sam and Ellie are stuck together, fulfilling a contract. This second chance romance is really cute. DJ Van Oss and Kathleen Li make a great team. this book was quite a treat to listen to. The story flowed well, the characters were not one dimensional, the narration went really well with the story. Good listen.

Write by your side is a wonderful second chance at love. DJ Van Oss has written a small town romance, with the introduction to a few characters. This book features Sam and Ellie. These two were college sweethearts, each had big dreams and together they were going to write. Their breakup was not easy, and the two lost touch, each having their own career path. Ellie is now a successful thriller writer, and Sam does ghost writing for a mystery series. But circumstances have brought them together again and they are forced to write one more book together. Will they be able to set aside their past to create a new story? This is a fun and enjoyable look at a second chance at love. These two have so much history, that at each corner, there is another memory. I love how they try to collaborate, and their final decision of what to publish! And all while building their relationship again. It's sweet and warm, just making your heart feel good.

Kathleen Li does a beautiful job with her narration. She even includes a little singing! Her voice has a warmth that feels like coming home when she narrates. It's soothing and easy to listen to. She easily switches between characters, has a good pace and gives a wonderful performance to this story.

I really enjoyed this light hearted and fun romance. ( it was just what I needed after finishing a rather intense Wilbur Smith book)
The characters where entertaining, and a good plot keeping the interest going throughout.
The narrator brought the characters to life,


I was given this audiobook in return for an unbiased review.