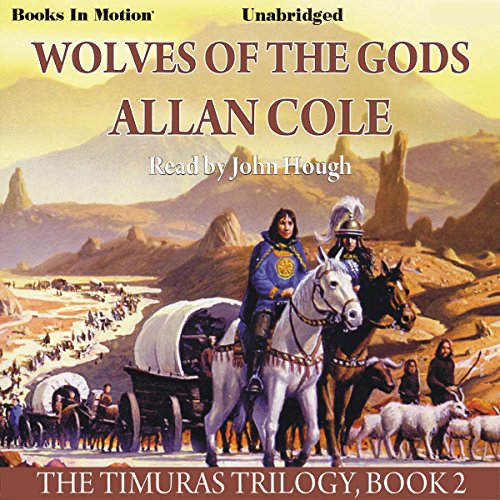 Wolves of the Gods

Wolves of the Gods

A nameless evil stalks the land, preying on all that lives, human and demon alike. Only one man has the power to stem the ravening tide: Safar Timura, greatest wizard of the age, whose matchless magic once raised Iraj Protarus to the throne of all Esmir... and then, when king turned tyrant, destroyed him. Now Safar is done with the deadly intrigues of courts and kings.

Back in his mountain home of Kyrania, he wants only to be left alone. But when a brutal murder smashes his solitude, Safar must lead his people on a desperate trek to safety - a perilous journey to fabled, far-off Syrapis, guided only by a magical vision and the words of a sorcerer long dead. The road leads straight through dark Caluz, a once-proud land now fallen beneath the sorcerous yoke of an unspeakable darkness. But there is no going back. Close at Safar's heels another evil follows like a rapacious wolf: Iraj Protarus. For the King of Kings has returned from the dead, hideously transformed - and thirsting for Safar's blood.

"Cole proves once again his mastery of setting as well as pacing, and the characterizations are more than acceptable, with the apparent return of Iraj from the dead, more bloodthirsty than ever, providing a cliffhanger ending and promising well for the remainder of the saga." ( Booklist)

Narration lets the trilogy down

I liked this story but that was definitely despite the horrible narration, I nearly gave up several times. I think Mr Hough needs to revisit the rules of punctuation - pausing in the middle of the sentence for no discernible reason gets irksome very quickly.

If you are going to listen to this story brace yourself!