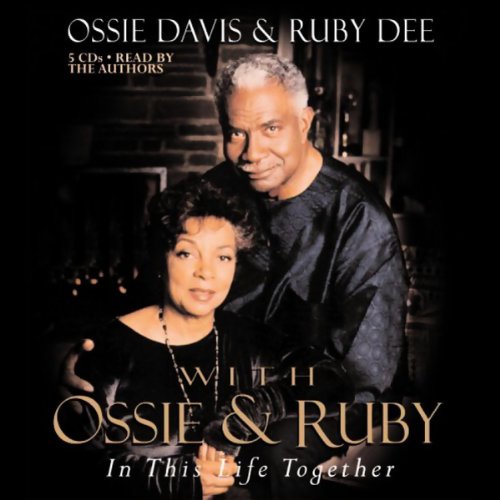 With Ossie and Ruby

Ossie Davis and Ruby Dee: legendary stars of the American stage, television, and film, a beloved and revered couple cherished not just for their acting artistry but also for their lifelong commitment to civil rights, family values, and the Black community. Now they look back on a half-century of their personal and political struggles to maintain a healthy marriage and to create the record of distinguished accomplishment that earned each a Presidential Medal for Lifetime Achievement in the Arts.

With Ossie and Ruby overflows with consummate storytelling skill developed by decades in the spotlight. From their early years as struggling actors in Harlem's Black theater to Broadway and Hollywood stardom, they regale the listener with colorful, entertaining tales of the places they've been and the people they've met. But their charming humor is leavened with a more serious side, as they share their experiences of keeping a family together in a world where scandal and divorce is the rule, and of being artists and political activists in an era of intense racial ferment.

Born into the struggle, their characters were shaped by the dynamic collisions of life, politics, and art; and from those experiences, they achieved some sense of their worth as married people, friends, and lovers. Warm, positive, and compelling, this is a book that will surprise and challenge listeners everywhere - Black and White, male and female, young and old. Lifting the veil of public image, media hype, and mystique, Ossie and Ruby speak of the real-life dilemmas and rewards of their lifelong search for purpose and value.

"They both keep the material fresh, which could be hard to do when talking about one's own life. This is an immensely captivating dual memoir and a real audio treasure, especially poignant since Davis has since passed away. The listener comes away with a true sense of the essence of these lives, the things that were and are important to them, and their accomplishments." (AudioFile magazine)

" . . . this is a compelling read, effectively evoking the challenges and rewards that have attended the authors' roles as black leaders . . . " (Publishers Weekly, October 1998)

"By turns sassy and sage . . . full of razor-sharp observations on who business, politics, race and love." (Ebony)

What listeners say about With Ossie and Ruby

I read the book 20 years ago learned, enjoyed, cried, laughed and was upset in parts. Ozzie Davis & Ruby Dee were a very dynamic couple . A friend told me their book was available on audible I was excited and just finished listening , hearing their voices was like having them in my living room telling their story. I recommend reading the book first and then listening to the book on audible.

Very inspirational and inspiring! Ossie Davis and Ruby Dee are great storytellers. They are a great example of teamwork.