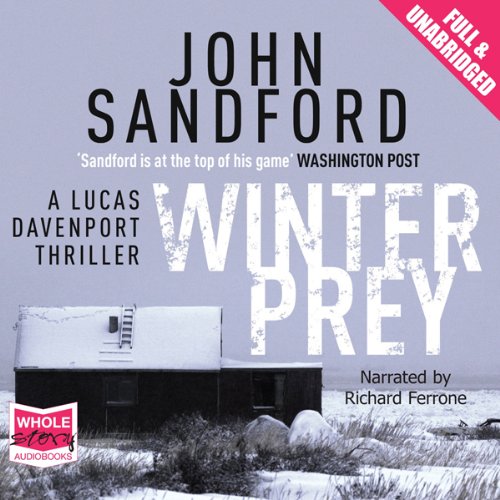 By: John Sandford
Narrated by: Richard Ferrone
Try for $0.00

The Iceman crept into the house on the edge of the lake. He killed the father first. Then the mother and child. And when his work was done, he set the house on fire…. Lucas Davenport has tracked killers in cities across America. But the woods of rural Wisconsin are as dark and primal as evil itself. The winters are harsher and colder. And in the heart of every mother and father, there is fear... Because tonight, the Iceman cometh.

What listeners say about Winter Prey

Another Good Book In The Series

Lucas Davenport starts off as a bit of a James Bond type. From the first book: "He was slender and dark-complexioned, with straight black hair going gray at the temples and a long nose over a crooked smile. One of his central upper incisors had been chipped and he never had it capped. He might have been an Indian except for his blue eyes. His eyes were warm and forgiving. Though his eyes were warm, his smile betrayed him.
If the chill of his smile sometimes overwhelmed the warmth of his eyes, it didn't happen so frequently as to become a social handicap."

Rules of Prey is fast paced, dark novel pitting an unconventional policeman (Lucas Davenport) and an organized serial killer - who is quite smart. They called him "the maddog". From the novel: "The maddog was intelligent. He was a member of the bar. He derived rules. Never kill anyone you know. Never have a motive. Never follow a discernible pattern. Never carry a weapon after it has been used. Isolate yourself from random discovery.
Beware of leaving physical evidence."

The character development is extremely well done. The story is told in third person, enabling one to get into the minds of both cop and killer. This is unusual - we generally get just one or the other. It gets off the a fast start, and shows why Sandford was able to leverage this into a major series with a huge following. It probably took more time to write than later books, and was well thought out.

There is a lot to like about Davenport. Davenport is a pretty believable cop. He doesn't always solve the case. He is dependent on the back-up of his fellow boys (and girls) in blue. He's also multi-dimensional. He spends much of his off-time playing role-playing games, including a Civil War game that he helped create.

Just like the previous books, it was good reading all the way through. Shame that the next in the series is not available.

Another excellent story from John Sandford it's so good you don't want it to finish but alas eventually does. One minor gripe it's not easy to remember which ones you've read all having "Prey" in the title.

my first time listening to a John Sandford book and i enjoyed it. Was narrated well too.

Lightweight and the plotting too convenient. Should have been really gripping given subject matter. But it wasn't. The narrator is a bit monotonous.