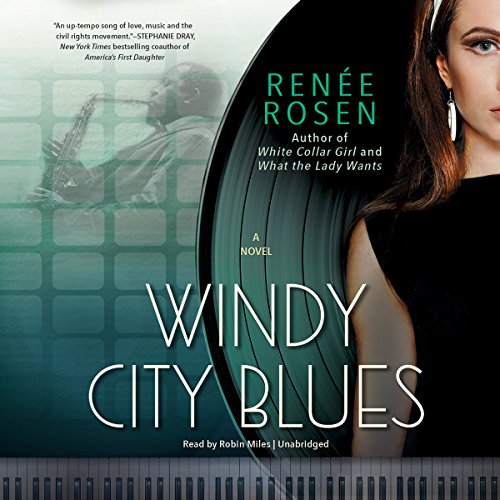 By: Renée Rosen
Narrated by: Robin Miles
Try for $0.00

In the middle of the 20th century, the music of the Mississippi Delta arrived in Chicago, drawing the attention of entrepreneurs like the Chess brothers. Their label, Chess Records, helped shape that music into the Chicago Blues, the soundtrack for a transformative era in American history.

But for Leeba Groski, Chess Records was just where she worked. Leeba didn't exactly fit in, but her passion for music and her talented piano playing captured the attention of her neighbor, Leonard Chess, who offered her a job at his new record company. What began as answering phones and filing became much more as Leeba came into her own as a songwriter and befriended performers like Muddy Waters, Howlin' Wolf, Chuck Berry, and Etta James.

But she also found love with a Black blues guitarist named Red Dupree. With their relationship unwelcome in segregated Chicago and shunned by Leeba's Orthodox Jewish family, Leeba and Red soon found themselves in the middle of the civil rights movement, and they discovered that in times of struggle, music can bring people together.

"The award-winning voice actor Robin Miles has a wonderful affinity for accents and character voices. This intimate look at the rise of Chicago's electric blues and the Chess Record label in the late 1940s and '50s gives her a perfect stage. Miles produces a myriad of character voices--from legendary bluesman Muddy Waters's Mississippi growl to harmonica player Little Walter's insistent tone to Leonard Chess's Yiddish intonations. Miles also finds the easy warmth and pulsating sense of discovery that sweeps the interracial couple Leeba Groski and Red Dupree from the first chords of a love song to the front lines of the Civil Rights movement. This is a big-hearted story that can only be told with the rhythm of the blues." (AudioFile)

Excellent book!! I'm a music lover, book lover, and historical fiction lover so how excited was I to read this book? Very. And I was not disappointed. I listened to the audio version of this book and the narration by Robin Miles was outstanding! This is the story of brothers Leonard and Phil Chess, Polish born immigrants, who founded Chess Records in 1950 Chicago, Illinois during the birth of the blues scene. I was familiar with many record labels but not familiar with Chess Records so I was surprised to learn that they were the first to sign such amazing talents as Muddy Waters, Chuck Berry, Etta James, just to name a few. This is such a riveting read about the struggles of not only starting a record label, finding artists to sign, and getting that music played on the radio, it also dealt with the struggles of being black, Jewish and an immigrant. It was heartbreaking listening to some of the events that took place in the book knowing that they actually happened and, unfortunately, continue to happen now. Renee Rosen did a fantastic job researching and writing Windy City Blues. I think there should be a blues soundtrack to go along with this book. I highly recommend it!

What the world needs now is a little more Leeba and Red. I love that Rosen can still tell a simple, relatable story of self-discovery and love and layer it within the deep richness of the Blues tradition and civil equality. A fantastic story and a great narration!!

My Book Club selected this book to read. Personally, I loved the historical compilation, but the writing was somewhat pedestrian....more of yeoman's effort, but glad I read it. I think my Book Club rated it about 2.8 out of 5.