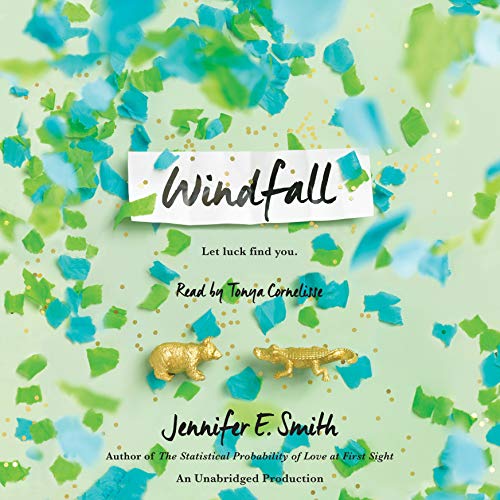 By: Jennifer E. Smith
Narrated by: Tonya Cornelisse
Try for $0.00

This romantic story of hope, chance, and change from the author of The Statistical Probability of Love at First Sight is one Jenny Han says is filled with all of her "favorite things", Morgan Matson calls "something wonderful", and Stephanie Perkins says "is rich with the intensity of real love".

Alice doesn't believe in luck - at least not the good kind. But she does believe in love, and for some time now she's been pining for her best friend, Teddy. On his 18th birthday - just when it seems they might be on the brink of something - she buys him a lottery ticket on a lark. To their astonishment, he wins $140 million, and in an instant everything changes.

At first it seems like a dream come true, especially since the two of them are no strangers to misfortune. As a kid Alice won the worst kind of lottery possible when her parents died just over a year apart from each other. And Teddy's father abandoned his family not long after that, leaving them to grapple with his gambling debts. Through it all, Teddy and Alice have leaned on each other. But now, as they negotiate the ripple effects of Teddy's newfound wealth, a gulf opens between them. And soon the money starts to feel like more of a curse than a windfall.

As they try to find their way back to each other, Alice learns more about herself than she ever could have imagined...and about the unexpected ways in which luck and love sometimes intersect.

"Smith weaves a poignant tale of teens coping with loss and change as they balance on the verge of adulthood.... Fans of Morgan Matson's and Deb Caletti's books will want to curl up with a box of tissues as they fall under Smith's storytelling spell." ( School Library Journal)
"[T]his compelling read, gracefully told, raises issues seldom explored in popular fiction. How can we rationalize life's inequalities? What do we owe, and to whom, when blessed with good fortune? Smart and entertaining, as to be expected from Smith." ( Kirkus Reviews)
" Windfall is about all of my favorite things - a girl's first big love, her first big loss, and - her first big luck." (Jenny Han, New York Times best-selling author of To All the Boys I've Loved Before)

What listeners say about Windfall

Couldn't Get Past Narration

Kept trying to get through the book for the story, but the narration made it impossible.

Struggled with this one. The narrator made it very difficult. I realize that the main characters are only 18, but the voices used for the dialogue made them all sound like idiots (both boys sounded like slow moving, dumb jocks - the girl a bit like a twelve year old heavy smoker).
The story was OK. I like the premise, but could not get over the narration.

Every character sounded stupid and it was difficult to take anything about the story seriously with the awful awful voices.

Why is she portraying the male characters like this

The way the narrator is portraying the male characters is as if you are acting like you are a dumb jock... honestly couldn’t finish the book because of the narration.. don’t bother wasting a credit with this audible

Alright, I think every man in this book is a total idiot based on the way she narrated them. I almost stopped listening multiple times because of this but somehow made it through. I liked the way she did Aunt Sophia’s accent until it started switching from South American too... Scottish?
The character of Teddy really does suck, and that’s the writing’s fault, not the narration. I’m supposed to believe my main character is in love with him? Really? Soup kitchen guy rocks. The end.

I liked the book but after hearing it not so much. The voice actress does not help the story at all. Please re-record.

I'm only on chapter 3 loving the story but I really dislike how the main actress voice for the guys. It makes it almost not worth it to listen to this fantastic book.

This book left me wanting more. I love the idea of a lotto book and this one played out differently than what I had hoped, very boring. The person reading was not the right pic either. Very disappointing, I normally would quit but for some reason I kept plugging along. I should have stopped. Waste of a credit.

At some points I was just so bored but the rest we're just plain amazing.

This book made me cry like a baby. I find it so relatable at times and it gave me a new outlook on "luck"