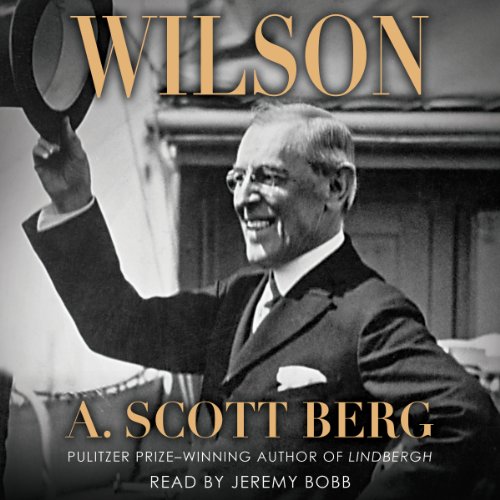 In the tradition of Truman, John Adams, and Team of Rivals, the Pulitzer Prize and National Book Award-winning biographer of Charles Lindbergh, Maxwell Perkins, and Samuel Goldwyn sheds new light on a president and his presidency in a way that redefines our understanding of a tide-turning historical moment.

A hundred years after his inauguration, Woodrow Wilson still stands as one of the most influential figures of the 20th century, and one of the most enigmatic. And now, after more than a decade of research and writing, Pulitzer Prize-winning author A. Scott Berg has completed Wilson - the most personal and penetrating biography ever written about the 28th President.

In addition to the hundreds of thousands of documents in the Wilson Archives, Berg was the first biographer to gain access to two recently discovered caches of papers belonging to those close to Wilson. From this material, Berg was able to add countless details - even several unknown events - that fill in missing pieces of Wilson's character and cast new light on his entire life.

From the scholar-President who ushered the country through its first great world war to the man of intense passion and turbulence, from the idealist determined to make the world "safe for democracy" to the stroke-crippled leader whose incapacity and the subterfuges around it were among the century's greatest secrets, the result is an intimate portrait written with a particularly contemporary point of view - a book at once magisterial and deeply emotional about the whole of Wilson's life, accomplishments, and failings. This is not just Wilson the icon - but Wilson the man.

What listeners say about Wilson

Well Written & Narrated But Too Much Hero Worship

I thought that this book was extremely well written. I also thought that Jeremy Bobb did an superb job with the narration. The biggest problem I had with the book is that Professor Berg has produced a volume that deifies President Wilson too much and is not critical enough of his shortcomings both as a person and as a world leader. Throughout the book Berg gives short shift to Wilson's weaknesses (his unwillingness to forgive people whom he felt betrayed him, his pure enmity for Henry Cabot Lodge with regard to the Versailles treaty and the racism that came from his Southern roots) while spending way too much time on the good that he accomplished (his Progressive Agenda and his willingness to try to avoid US involvement in World War I until Imperial Germany pushed him too far). In writing this book Berg indicated that he had access to previously unreleased materials (i.e. the letters of one of Wilson's daughters and the letters of Dr. Grayson who was Wilson's personal physician), but in completing the book I am left with the feeling that the addition of these materials did not add greatly to the biography or shed any new light on Wilson than what I already know. If you have never read a biography of Wilson before, this book would be a good place to start in trying to understand him- but I believe that if you really want to understand the man and the times he lived, this book is only a first step.

What to do with Wilson

What aspect of Jeremy Bobb’s performance would you have changed?

author glosses over flaws and rationalize way to many of them

The last few years I have been reading everything I can get my hands on about World War I. Woodrow Wilson was the President during WWI therefore I have read several biographies on Wilson. In 2012 I read “Woodrow Wilson: A Biography” by John Milton Cooper which I enjoyed. Due to all my reading of Wilson I might have been demanding more from Berg’s biography of Wilson than he could deliver. Berg successfully demonstrates Wilson in all his complexity. The book covered in-depth Wilson’s youth, education process, his early career and his turning toward academe. The book describes his ascent form academia to president. Berg also noted that when he was young Wilson practiced his signature over and over because he felt that someday he would be writing it on important documents. His early goal was to be a statesman and he studied toward that goal. As President Wilson created the Federal Reserve Bank, progressive taxation and the State of the Union address. Berg downplayed Wilson’s faults for example he displayed a southern perspective of racial intolerance and he increased segregation in some government agencies. He also downplayed Wilson inability to forgive anyone he thought crossed him, his womanizing, and his behavior negotiating the Treaty of Versailles. His first Secretary of State was William Jennings Bryant who most people recognize from the Scope Trial and his railing against evolution. I did not care for the bible quotes at the beginning of each chapter. If this is a person’s first book on Wilson remember even thought the book is in-depth coverage in it not unbiased. Jeremy Bobb did a good job narrating the book.

Woodrow Wilson is an interesting character in an American history. In many ways he led to many of the socialist agendas being perpetuated on America today. Although that is not emphasized in this book. Neither is his racist upbringing or continued thought into his presidency. Even his Christian faith is not discussed in depth. Overall I found this biography to be filled with inconsequential facts it did not take a deep look into the most interesting parts of Wilson‘s life and legacy.

Who remembers Wilson? I do no and so worth it!

Woodrow Wilson is almost forgotten. He was a brilliant, moral, if flawed man and this book can't be put down. Scott Berg has exceeded even his biography of Lindberg here. The book is mesmerizingly read aloud and a joy to go back and walk around in Wilson's time and see him struggle and mostly prevail.

I am working my way through at least one book on each President. Wilson has been the best written and narrated so far. I found myself having a hard time taking a break from the narration. I often felt as though I were in the room as events unfolded. Well written. Very well narrated.

The book shows Wilson highly moral, religious and principled man and public figure. He is committed to family, country and the world.

I was pleased that the book didn't avoid Wilson's racist views. He was both a product of his environment and hostage to inability to see blacks as equals. Despite pushing for equality among countries, he never saw it home. The book opened my eyes to racist antebellum behavior .

A good read any time

complete, but just too long

I am happy to learn about Woodrow Wilson, a figure I did not previously know well. This biography was too long for me. Comparing it to Caro.'s multi-volume biography of Lyndon Johnson, I found the Johnson biography an easier read.

It's amazing to me that Wilson didn't enter political life until his 50s, and that despite the pressures of such a life, he stuck to his values and morality. Regrettably, his morality did not encompass equal rights for all races. Based on this writing, I wonder if World War II may have been avoided or at least lessened had the league of Nations been enacted in the US. I recommend this book to anyone interested in politics.

It is well written but has a clear pro Wilson stance that causes it to gloss over the negative aspects of his career. It mentions them but as briefly as is acceptable. Despite this it is a gripping telling with great detail.

Still not quite sure how he made it to president so quickly- except perhaps he was a politician in all walks of life. Fascinating character. Yes, looking back - as racist as many of the time. But this does not eliminate good he did - women's vote, 1st world war, post ww1 negotiations, development of Princeton.

I enjoyed listening to this epic biography, masterfully written and excellently narrated, but over time I have long pondered the author's efforts to downplay both Wilson's obvious racism, and that of his administration with its Jim Crow laws, and also the wretched victor's justice that he insisted on doling out at the Treaty of Versailles, a major factor in the rise of Hitler.

Would the world have been a better place had Wilson never been born? A. Scott Berg sadly never asks this question.