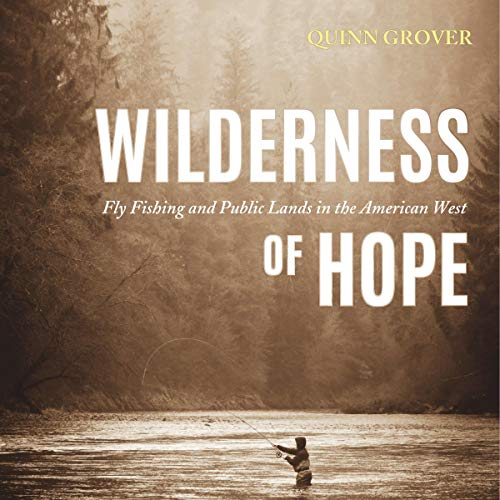 Longtime fly fisherman Quinn Grover had contemplated the “why” of his fishing identity before, more recently, becoming focused on the “how” of it. He realized he was a dedicated fly fisherman, in large part, because public lands and public waterways in the West made it possible. In Wilderness of Hope Grover recounts his fly-fishing experiences with a strong evocation of place, connecting those experiences to the ongoing national debate over public lands.

Because so much of America’s public lands are in the Intermountain West, this is where arguments about the use and limits of those lands rage the loudest. And those loudest in the debate often become caricatures: rural ranchers who hate the government; West Coast elites who don’t know the West outside Vail, Colorado; and energy and mining companies who extract from once-protected areas. These caricatures obscure the complexity of those who use public lands and what those lands mean to a wider population.

Although for Grover fishing is often an “escape” back to wildness, it is also a way to find a home in nature and recalibrate his interactions with other parts of his life as a father, son, husband, and citizen. These essays reflect on personal fishing experiences with a strong evocation of place and an attempt to understand humans’ relationship with water and public land in the American West.

“Makes a strong case for passion as the key ingredient of a meaningful life, but also for knowing how the planet might make best use of us.” (Brooke Williams, author of Open Midnight: Where Ancestors and Wilderness Meet)

“Provides a life compass for those of us who pursue wild and native trout on our public lands and waters.” (Craig Mathews, author of The Yellowstone Fly-Fishing Guide)