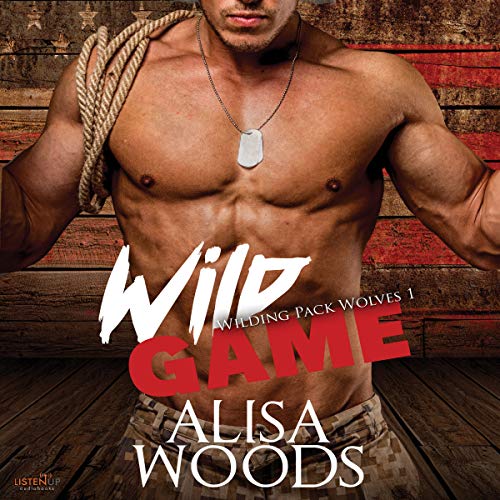 She's a sexy gamer in danger. He's a bodyguard with a secret.

Ex-Army Texas boy Owen Harding fears only one thing: his inner beast. A year in Agent Smith's experimental cages has changed his wolf into something monstrous. But a hate group is hunting the Wilding pack, so Owen's serving again, this time as bodyguard. If only the girl he's protecting wasn't so damn sexy and completely off limits.

Nova Wilding's father was assassinated, leaving her a gaming company to run, a new game to release, and a pack full of wolves who want her for a mate, including a beta who's determined to have Nova and her company. When a bomb goes off in her car, Nova finds herself in her sexy bodyguard's arms, but he's absolutely the wrong man at the wrong time.

Nova has a duty to her Father's company and her pack, but as a murderer is on the loose and Nova is being protected by a wolf that tempts her wolf to submit and mate. Owen is unsure of what he is now and will protect Nova even if that means he needs to leave her. An exciting story that keeps you on edge till the end. The narrators were good, and they do bring the characters to life.

This was a great paranormal romance. Nova, is the daughter of the CEO to her company alpha male in her Pack. Shifter are coming out to the public and as a result, hate groups have sprung up. Nova's father get assassinated and as a result, she now runs the company, the pack is in need of a new Alpha and she is placed under security. Owen is her head security guard. He comes from a troubled past, not knowing if he can or should shift; and if her and take a mate. If you like True Blood, then you'll like this. The aspect of revealing paranormal beings to the general population and human hate groups reminded me a lot of that series.
Owen and Nova's relationship started of so uneventful to me. I didn't feel the sparks until they were realizing that they couldn't be together. However I loved their relationship in the end. There is another interested shifter as an antagonist. I think he was a good fit in this story. I'm curious to see whether that character will show up again in the series.

Shannon and Holly did great jobs. I loved the southern drawl. The character was really bought to life.

Unless you want constant bickering, avoid this book. I loved the River series, but won’t listen if the other books follow this lead. Even the premise doesn’t follow wolves finding their mates. Skip and find another book.

I loved how much I feel into listening to this story and would hate to either get home or get to work where I would have to stop listening to it.

What does Holly Chandler and Shannon Gunn bring to the story that you wouldn’t experience if you just read the book?

This is well worth a credit and I play on getting the rest of this series. While this one was a gift from the author I would have happily used a credit for it

There's nothing like a hot wolf adventure to get your blood racing. Owen's crazy about Nova but thinks she's not only out of his league, but he's sure he can never claim her as his own. Kidnapping, torture, and total commitment to Owen's love make this a great read.

Not what I expected but a good story about prejudice and overcoming differences in the shifter world.

Maybe you need to read the related stories???

I was in the mood for a good paranormal romance, and I know what I'm getting with this genre. But damn a little character development would be nice. We enter the story after the main characters have met and developed some sort of awareness of each other. It would have been nice to hear about that.
Once all the action happens I feel like I hardly know the couple and I certainly don't feel a single bit of connection between them. Everything happens so fast and they're 'love' for each other is never justified. I believe there are others in a related series of stories here that I obviously didn't read so maybe you just need to read those first.

Bk 1 Owen and Nova geeks get love to

This is the first story of some of the changes the caged wolves show. each wolve shows different abilities that was pumped into their system by the crazy colonel wilding. this is Owen Harding and Nova Wildings story. narration was sometimes hard to follow, but story line was great. story has great character develop and settings were clear. recommend for a quick 5 hours escape from daily life, lol.

Cut back about 70% on the Texas accent, and this would be a good production.

Without doubt if they were into shifters

Which character – as performed by Holly Chandler and Shannon Gunn – was your favourite?

Both characters were performed well with lots of feeling

I started listening to this book hoping that it was going to be as good as The River Pack series which was my introduction to this wonderful author. I was not disappointed Although this story is a 'stand alone' it does start where the three River Pack books finished.

Owen is an ex military sifter who had been illegally imprisoned and experimented on for over a year before being rescued by The River Pack. He now belongs to the River Pack along with his service buddy Jace River and he works for Riverwise Security. He is assigned to be the bodyguard for Nova Wilding.

Nova has recently taken over as the CEO of Wild Ride a computer gaming company after her father was murdered. The whole of the River Pack and the Wilding Pack have been outed and are now at risk.

I never give spoilers so I can't really say too much more without doing so. What I will say is that yet again Alisa Woods has given us a wonderfully strong but damaged hero who needs the love of his mate to, if not cure him then, make him whole. There are some very tense moments in the story when you have to hold your breath and hope for the best.

Nova is a very strong woman and you just have to hope she will follow her heart and not take the wrong mate.

Would you listen to Wild Game again? Why?

Yes, I found the story interesting

What other book might you compare Wild Game to, and why?

Have you listened to any of Holly Chandler and Shannon Gunn ’s other performances? How does this one compare?

Definitely and I did.

If you love strong women and big sexy alphas you should definitely give this book a go.