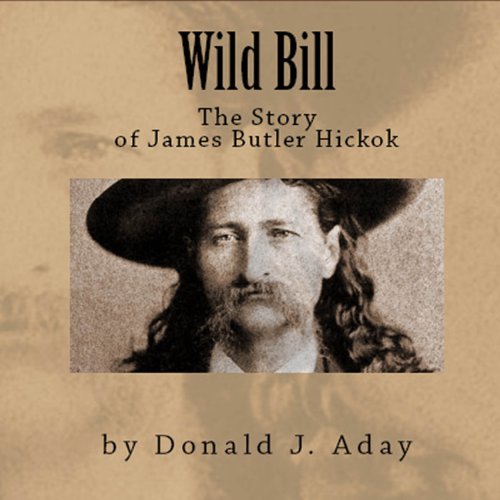 The era of the gunfighter in the Wild West began during James Butler Hickok's life. Better known as "Wild Bill," he was the first and most famous gunfighter. A man without equal, he was said to have killed hundreds of outlaws in valiant and bloody struggles to the death, from which he invariably emerged the victor and the hero. Hickok himself was not above adding embellishments to the stories about himself to any reporter who sought him out. Wild Bill - The Story of James Butler Hickok is about the man and his adventures.

Hickok was much more than his image and reputation as a gunfighter imply. He was, in reality, a man of impressive character, courteous, and gentlemanly, a generous and loyal friend, a fearless and dangerous foe. But behind his calm, confident presence lay an acute wariness, a sense of foreboding and paranoia. He had become the best man with a gun, a fearsome and feared killer, but Wild Bill had also made himself a target for every aspiring gunslinger with the nerve to try to become known as the man who killed Hickok.

By the end of chapter 2 I had already heard enough historical inaccuracies to stop reading. Those wanting to write books on historical characters should do their due dilliagance, at least beyond the basics.
Example: Rock Creek Station was an overland trail station and Road Ranche, not a "small town" as this books author portrays it as.
If simple basic and easy to find facts like this are ignored then what else can be trusted in this book?

this book was horrible when it was all said and done I felt like I had been robbed it reads like a third grade read . DO NOT WAIST YOUR TIME OR MONEY

Too much speculation and not enough research

I understand that hard facts and information on western legends is difficult to find and sift through but this book is juvenile with little research to back up speculation after speculation on Wild Bill. If you want a balanced, researched, documentative biography of Wild Bill, this book isn't it.