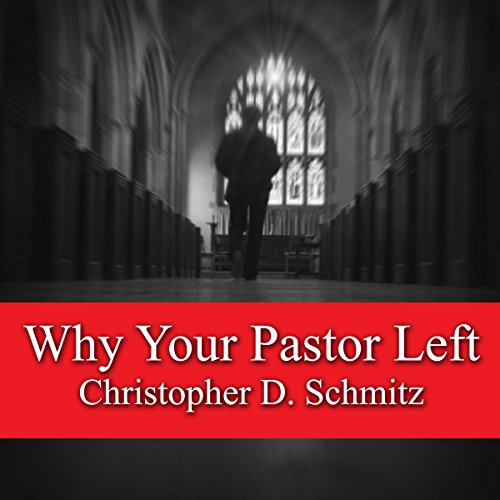 Why Your Pastor Left

By: Christopher D Schmitz
Narrated by: Philip Benoit
Try for $0.00

Moments after our pastor exited the building that afternoon in 2008, most of the congregation sat in shock. A tiny but powerful minority wore victorious smiles at the minister's ousting. The lady to my left wept. Her pleading question kept me awake all night. "Why did our pastor have to leave?"

Polls reveal startling statistics regarding pastoral ministry: 91 percent of ministers know three to four others who've been forced out of pastoral positions. One-third of all pastors serve congregations who either fired the previous minister or actively forced their resignation. At any given time, 75 percent of pastors in America want to quit. More than 2,000 pastors leave their ministry each month. American church decline has reached epidemic proportions. In the last century, it has waned nearly 60 percent. Pastoral attrition is either an indicator of that problem, or is central to it.

Why Your Pastor Left is full of detailed statistics and identifies the top 10 "Ministry Killers" that cause pastoral stress and eventual "burnout".

What listeners say about Why Your Pastor Left

excellent resource for a pastor or a church

Although representing one side of the theory, the author made excellent points and thoroughly explained his position with scripture and personal accounts. Highly recommend this book to all members of the body. Well done pastor!