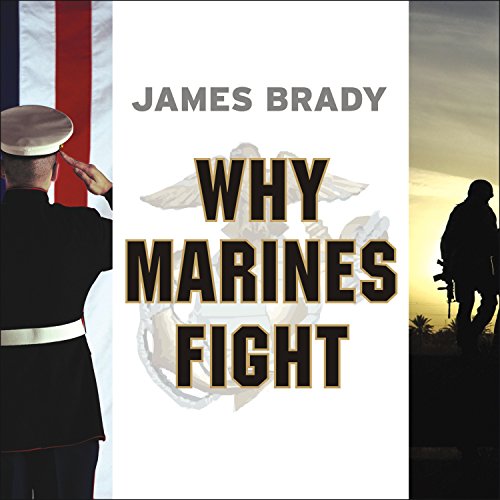 By: James Brady
Narrated by: Michael Prichard
Try for $0.00

As the war in Iraq continues, the idea of being a soldier in wartime is of interest to many Americans. Why Marines Fight by James Brady is a ruthlessly candid book told in the words of U.S. Marines themselves, who answer provocative questions about what drives them to fight so competently and ferociously.

For more than two centuries, U.S. Marines have been among the world's fiercest and most admired of warriors. This pounding look into the U.S. Marines is magnificent in scope and is written by an author that some marines consider to be the unofficial poet laureate of their corps. Brady interviews combat marines from wars ranging from World War II to Iraq and Afghanistan, and records their responses in their own unique and powerful voices. These he crafts into an authentically American story of a country at war, as seen through the eyes of its warriors. Americans who experience Brady's chronicle of this part of a soldier's life and its lasting effect may find it impossible to forget.

"For anyone who wants to know how the U.S. Marine team works in war and peace, this book is indispensable." (Booklist)
"These inspirational tales cover as many Marine experiences as Brady can pack in." (Kirkus)
"Vivid....Unusually personal and revealing." (Publishers Weekly)

What listeners say about Why Marines Fight

Essentially, James Brady has a bone to pick with the Bush administration, and has draped his argument with an American flag and esprit de corps.
He is of course entitled to his opinion, but such work should be appropriately presented. Instead Brady has drawn on the mystique of the Marine Corps and their vaunted courage and honor in order to create a vehicle for his own political opinions.
I thought I was buying a book about my beloved Marine Corps. Instead I received Brady's very narrow political opinion disguised as narrative.