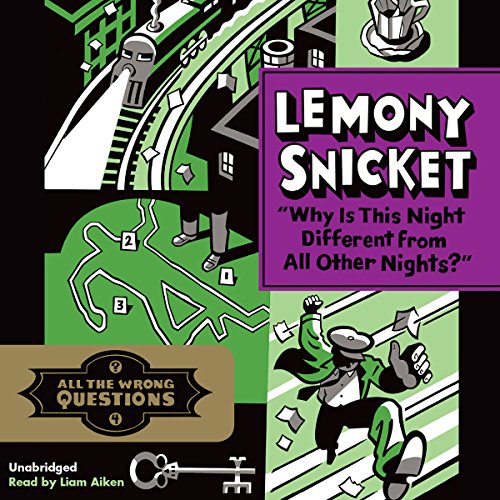 "Why Is This Night Different from All Other Nights?"

By: Lemony Snicket,Seth - illustrator
Narrated by: Liam Aiken
Try for $0.00

Before the Baudelaires became orphans, before he encountered A Series of Unfortunate Events, even before the invention of Netflix, Lemony Snicket was a boy discovering the mysteries of the world.

Train travel! Murder! Librarians! A series finale! On all other nights, the train departs from Stain'd Station and travels to the city without stopping. But not tonight. You might ask, why is this night different from all other nights? But that's the wrong question. Instead ask, where is this all heading? And what happens at the end of the line? The final book in Lemony Snicket's best-selling series, All the Wrong Questions.

What listeners say about "Why Is This Night Different from All Other Nights?"

What a series! Walking into this, I was told the themes and subject matter were akin to Harry Potter and in many ways this is correct. I feel adults would find this just as enjoyable as the YA crowd.
I also think this series is a dark horse in all the best ways possible. Lemony is on a journey we all must take and learning a great deal. First and foremost, Lemony is being taught that life is not fair, that people in general are capable of great good and exceptional evil. Many of these lessons involve pain, both mental and physical, and we travel with him on this journey.
This book is so insightful that at times it is actually disturbing, but in a good way. It shows how life can be beautiful, to fight back and stand strong with the full understanding that it may not matter, that the "good guys" don't always win, and a thousand other themes each with different levels of poignancy.
To sum up, these books were extremely illuminating, shining their light on the both the good and the bad. They are in that rare category of books- books that are transformative.
I feel I am the better for it.

If you've made it this far in the series, you clearly like Lemony Snicket's work and this book does not disappoint! It is consistently well written and is a murder mystery on a train....who doesn't like that! Thoroughly enjoyed this book. I want more.

Aiken's performance is just as consistently subtle and nuanced as his other readings in this series. I can't imagine Lemony's sardonic voice as anyone else. As far as the story was concerned the pacing seemed unusually faster and what I thought would be Snicket's Murder on the Orient Express turned into a quick ans unsatisfactory game of Clue. I don't know why I expected closure or satisfaction from this. It's his trademark as a writer and character. But the turn this book took derailed the entirety of the atmosphere built up in the other books and I'm left a bit confused as to what the audience, who are supposed to be young readers first, was to gain from this. I have to revisit this series of work later. I hope Snicket does too as I thoroughly enjoyed the cast throughout this series and for it to end as suddenly and bitterly as it did just feels wrong and dismal. Hmm...

I loved this series but the ending on this one was took too much slogging through. It was about a "fragmented plot" and unfortunately in writing about it the plot of this book went to fragments at the end. The ending was a disappointing and confusing answer key which puts too much time into explaining itself to be good. It should fly. And by "fly" I mean out the window of a train. And by out the "window of a train" I mean because I threw it. And when I say "I threw it", it was because it was a disappointing close to an otherwise great series.

Basically the ending was like a broken vase that seemed hastily glued together with some vaguely plausable but confusing explanation/lie involving a baseball and an open window. The thing came together but it was an eyesore of fragments that never should have been glued together in an otherwise delightful series.

The narration is good for Lemony Snicket-- and Liam Aiken is definitely the right pick for this book-' but the inconsistency for the other characters (who have an accent one second and then the next second don't) kind of gets my goat.... which is a phase I use here to say that it irks me.

Daniel Handler, should further continue this sub series hopefully overlapping with a series of unfortonite events.